The NAACP just won a years-long First-Amendment fight with the city of Philadelphia. 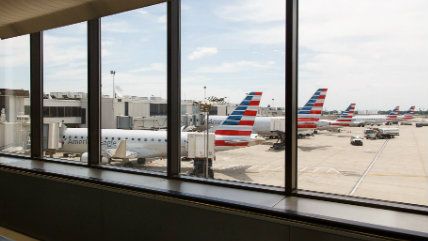 Philadelphia officials can't ban political or religious speech at the airport just because it might make some visitors uncomfortable, says the U.S. Court of Appeals for the Third Circuit. The decision is a victory for the National Association for the Advancement of Colored People (NAACP), which had been told that city policies prohibited its ads from appearing at the Philadelphia International Airport.

The trouble started in 2011, when the NAACP attempted to run an ad on airport-display monitors that said, "Welcome to America, home to 5% of the world's people & 25% of the world's prisoners. Let's build a better America together. NAACP.org/smartandsafe." But city officials declined the ad, citing an informal Philly policy that prevents airport-advertising with noncommercial messages.

In 2012, Philadelphia passed a formal policy stating that ads not proposing "a commercial transaction" were forbidden at the airport (as were ads relating to alcohol or tobacco products, sexually oriented businesses, and political campaigns). Noncommercial ads promoting Philly tourism, transport, and government-initiatives were exempted.

The city justified this policy by citing a desire to avoid controversy and to maximize ad revenue. City lawyers argued that controversial political or religious messages in some airport ads could jeopardize the impact of nearby commercial ads, thereby leading to an overall decline in willing advertisers. They also claimed that even if revenue wasn't affected, the ban would be justifiable to keep visitors from feeling offended.

Not good enough, said the circuit court. "No matter the type of forum, restrictions on speech on government property must be reasonable. The city's ban on ­noncommercial ads at the airport is ­unreasonable because it is not supported by the record or by common-sense inferences," wrote Circuit Judge Thomas L. Ambro in a decision cosigned by Chief Judge Theodore McKee.

Third Circuit Judge Thomas Hardiman, however, dissented, writing that the city should be able to regulate speech in order to create a "comfortable environment" for travelers. "It still seems reasonable to think that ­disallowing controversial advertisements on the airport's more than 100 monitors will have a positive impact on travelers' ­experiences by removing some stress or controversy from their journeys," Hardiman wrote.

That does indeed seem reasonable—and also irrelevant. The role of government regulations on speech shouldn't be to maximize profits for commercial enterprises or protect the delicate sensibilities of passersby.

Luckily, Judges Ambro and McKee seem to believe that the First Amendment trumps turning Philly's airport into one big safe-space from emotional discomfort. "Because the ban [on noncommercial airport-advertising] is unreasonable, it violates the First Amendment and cannot be enforced as written," their opinion stated.

The judges also noted that the city's claims about ad revenue and offense-taking may merely be a cover for its "viewpoint discriminatory" speech policy—that is, that Philly's official reasons for rejecting the NAACP ad could have been concocted after-the-fact to conceal a simple dislike for its message. The city conceded as much was possible in court, admitting that its argued reasons might be "strictly in the realm of lawyer argumentation." The court points out that, "asked if the City can invent justifications when writing its appellate briefs, counsel for the City answered yes" and that "the City further conceded the possibility that its actual intent might have been to suppress viewpoints that cast Philadelphia or the region in a negative light."