New Round of Fearmongering Over Texting and Driving

Fatal accidents down over recent years, and distracted driving makes up a small portion of those. 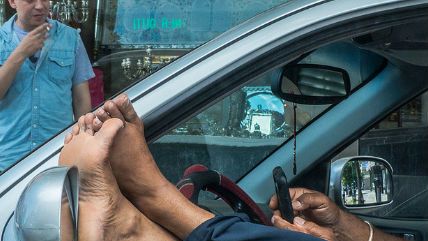 If you went by the breathless reporting on texting and driving, or the word of law enforcement or "traffic safety advocates" you'd think at any given moment someone is careening to their death because they or another driver had their eyes on their cellphones and not on the road.

The latest entry comes from the AP with the headline "Police Losing Battle to Get Drivers Down to Put Down Their Phones". Police around the country are handing out tickets ranging between $20 and $500 (Lousiana), according to the AP, but say they can't catch everyone on a cellphone because it's so prevalent. Cops use bicycles, tractor trailers, and even dress as homeless people to catch drivers using cellphones while theirs cars are moving or while they're stopped at red lights or stop signs. Fortunately some states, like Florida, treat texting and driving as a secondary offense so police won't stop you merely for that infraction.

The AP, and the police officers they spoke to, doesn"t offer much in the way of statistics to back the assertion that texting and driving is such a big problem vis a vis traffic accidents. The AP quotes data from the National Highway Traffic Safety Administration (NHTSA) which estimates 3,500 people died in crashes involving distracted drivers in the U.S. and Puerto Rico in 2015, with 476 of those being drivers who use their cellphone. The AP also notes that safety advocates question those numbers because of the self-reporting involved.

Some of this, of course, has to do with technological advancements that have made cars safer to drive. But the numbers don't support the idea that smartphones are contributing to a rise in traffic fatalities, nor the contention that catching so-called distracted drivers ought to be a high law enforcement priority. Auto safety experts have warned about the obsession over texting and driving before; in short, the theory goes that cellphones are just replacing previous driving distractions (like reading a newspaper, doing your make-up, or eating breakfast) rather than adding to them. But an industry has sprouted up surrounding the idea that texting and driving is a grave problem; there's government money available to proselytize about it and of course a new revenue stream for law enforcement and local governments to exploit, and a new problem for them to demand more money for.