Cash Means Freedom, Which Is Why So Many Officials Hate It

Opponents and proponents of folding money agree that the stuff protects you from the state-but they differ about the value of that protection. 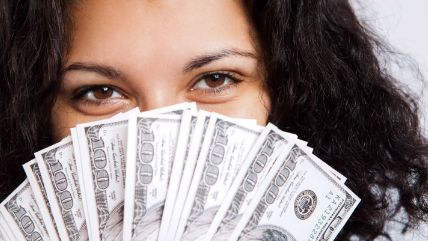 Cash—the familiar, anonymous paper money and metallic coins that most of us grew up using—isn't just convenient, it's also a powerful shield for our autonomy and our privacy. That's the argument of cash advocates of course—but also of those economists and government officials who want to abolish the stuff. Cash's power to protect people from meddling and tracking motivates both parties, either to shore up our defenses against the state, or to squish them under their thumbs.

And yes, you need to follow this debate. That's because the elimination of physical cash isn't some hypothetical possibility for the distant future; it's a goal actively sought by many international movers and shakers, and one that's nearing fruition in several countries.

Rogoff likes the power that eliminating bills larger than $10 would give the government over the economy, including manipulating people's spending and saving habits. "Take cash away, however, or make the cost of hoarding high enough, and central banks would be free to drive rates as deep into negative territory as they needed in a severe recession."

Such negative interest rates, he and other economists believe, could be used to spur people to spend their money rather than keeping it in the bank.

Peter Bofinger of the German Council of Economic Experts agrees. "Stand up for the abolition of cash, since coins and bills are obsolete and only reduce the influence of central banks," he proposed last year.

Citigroup chief economist Willem Buiter also goes along with the belief that abolishing cash is a necessary step for giving governments the economic power they need to monitor and control economic activity.

There's a price for abolishing cash, as you'd expect. In a world without the stuff, "You'd have no choice but to conform to the intermediaries' automated bureaucracy, giving them a lot of power, and a lot of data about the microtexture of your economic life," Brett Scott warns at OpenDemocracyUK.

"To eliminate cash is to say to hell with financial privacy," cautions Conor Friedersdorf at The Atlantic. "An end to cash would mean that every financial transaction is exposed to a third party."

Cash is "printed freedom," German economist Lars Feld pithily offered as a direct rebuttal to his Council of Economic Experts colleague. People "should be entitled to an escape from all-out state control," Deutsche Welle clarified with regard to Feld's views.

There's really no argument here. Cash abolitionists fully understand that cash shields individuals from the state—and they hate that protection.

"But where does one draw the line between this individual right and the government's need to tax and regulate and to enforce the law?" objects Rogoff, whose book, The Curse of Cash, came out last

week. He knows where he would draw it—to encompass a lot more enforcement and much less privacy.

Buiter also acknowledges charges that abolishing cash would be "shockingly illiberal"—and dismisses them. "[T]he net benefit to society from giving up the anonymity of currency holdings is likely to be positive (including for tax compliance)."

"I confess to not being surprised," sniffed former Treasury Secretary Larry Summers, "that resistance [to eliminating high-denomination euro notes] is coming out of Luxembourg, with its long and unsavory tradition of giving comfort to tax evaders, money launderers, and other proponents of bank secrecy."

Any resistance should be suppressed, Rogoff emphasizes, as he notes that people may try turning to substitutes, such as foreign currencies, cryptocurrencies, and gold coins.

"Won't the private sector continually find new ways to make anonymous transfers that sidestep government restrictions? Certainly. But as long as the government keeps playing Whac-A-Mole and prevents these alternative vehicles from being easily used at retail stores or banks, they won't be able fill the role that cash plays today."

Increased scrutiny and control over people's lives are very much desirable outcomes in the eyes of the economic policy makers who favor eliminating cash.

But even as the debate over money and autonomy takes place, the experiment in transitioning to easily tracked electronic transactions moves forward.

"Eighty per cent of all transactions in Sweden are made by cards," the country's official website boasts. "Digital payments via card or apps are so widely accepted that many Swedes no longer carry cash… Cash is already scarce, and card will become even more king."

Cash is declining so rapidly in Sweden that the central bank actually put on the brakes. Officials are worried that with half of bank branches refusing paper money, older Swedes are being left behind.

Denmark's government is vigorously prodding the transition from cash to electronic payments. In 2014, Danmarks Nationalbank announced it, "has decided to initiate a process to discontinue internal printing of banknotes and minting of coins during 2016." Danish officials openly say they want to eliminate cash payments by 2030.

Norway's largest bank has the same goal, with the hope of eliminating "under-the-table money and laundering."

While Europe as a whole isn't quite ready to dump folding money, the European Central Bank is joining the U.S. and other countries in eliminating higher denominations.

Perhaps it's not surprising that Scandinavians are leading the way toward a future devoid of financial privacy. The region's inhabitants are stereotyped as submissive to governmental whims—to the point of "benign totalitarianism," as a British writer described Swedish political norms. That's a bit unfair, given free market reforms in Denmark and Sweden that make the private sectors in those countries rather robust. But Scandinavians do seem to have more faith in their rulers, and less experience with truly hideous regimes, then some of their neighbors.

Neighbors like Germany, for instance, where people know exactly what can happen when the state can monitor everything you do. "For historical reasons," Deutsche Welle noted delicately about the

country's lack of enthusiasm for disposing of anonymous payments, "Germans place a high value on privacy and data security." In fact Germans are more likely than Americans to keep and use cash for transactions.

On that point, proponents and opponents of cash agree. It's the value of that free choice about which they differ.