Here's why calling Donald Trump 'reckless' doesn't pack that much of a punch. 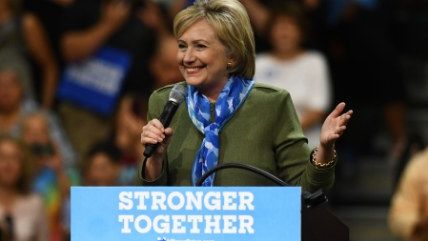 Today, right before Labor Day weekend, the FBI dumped some heavily redacted summary files of its interview and investigation of the private email and communication systems set up by Hillary Clinton when she was secretary of state.

Hey, at least they released the information early enough so that journalists can search through it before dumping their findings onto a populace that is currently stuck in traffic.

Here's a very quick summary from the Washington Post:

The documents, which total 58 pages, do not seem to provide any major revelations about Clinton's actions — though they paint her and her staff as either unaware of or unconcerned with State Department policies on email use. The materials also show that the FBI was unable to track down all of Clinton's devices, including phones, it sought, and that made it impossible for agents to definitively answer every question they had, including whether Clinton's emails were hacked.

"The FBI's investigation and forensic analysis did not find evidence confirming that Clinton's e-mail accounts or mobile devices were compromised by cyber means," the author of the report wrote. "However, investigative limitations, including the FBI's inability to obtain all mobile devices and various computer components associated with Clinton's personal e-mail systems, prevented the FBI from conclusively determining whether the classified information transmitted and stored on Clinton's personal server systems was compromised via cyber intrusion or other means."

When they say "all her devices," they're talking about 13 different mobile devices and 5 tablets, most of which were never found or turned over to the FBI for inspection. That information has been raising a lot of eyebrows, given how Clinton's defense of her secretive and private email and communication methods was because she wanted to handle it all from one device for ease. Maybe she meant only one device at a time? (Update: Also, a laptop used to archive Clinton's emails is missing.)

The other big eyebrow-raiser is that it appears, at least based on what the FBI was told, that Clinton had very little grasp of what classified markings on documents even were or what they meant. She did not know that a "C" marking meant that she was dealing with "confidential" information and told investigators she speculated "it referenced paragraphs marked in alphabetical order."

Clinton sent a memo warning staff not to conduct Department of State emails from personal accounts but then later told the FBI she didn't recall sending that memo. And the State Department sent out warnings frequently to staff about the security dangers of not using mobile devices not "configured to State security guidelines."

Oh, and the FBI has recovered more than 17,000 emails that she didn't turn over to the FBI, like she says she did. They're a mix of both work-related and personal emails.

Chris Cillizza over at the Washington Post has a great look through the components of the investigation that hadn't really been made clear already from FBI Director James Comey's previous public statement. A deep look paints a picture of a secretary who was at least completely disengaged in appropriate security protocols, even though she herself was at one point concerned she had been hacked.

At its worst, we're looking at somebody who is deliberately playing dumb about the handling of classified materials in order to avoid accountability, and that person is now asking to us to vote for her as president. Even without proper labeling, somebody with the duties of secretary of state should know what sort of information they're dealing with. Comey said exactly that in July. Remember, part of Clinton's campaign is essentially calling Donald Trump dangerously uninformed and reckless.

Peter Suderman has written extensively at Reason how this entire scandal has highlighted Clinton's problems with honesty and why voters don't trust her. Read some previous analysis here and here.

You can download the FBI documents and analyze them yourself here.