Larry the Cable Guy: "I'm a Trump man and when I say 'Trump Man,' I mean Gary Johnson" 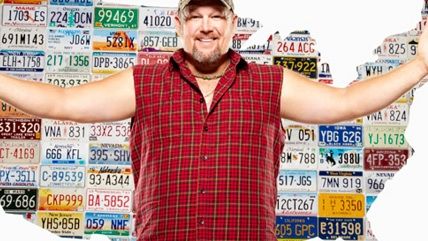 Via the Libertarian Republic comes footage of "Blue Collar Comedy" star and Prilosec pitchman Larry the Cable Guy dissing both Hillary Clinton and Donald Trump. Not that anyone could blame him, but Larry goes deeply scatological while also making the case for personal autonomy.

On Fox & Friends a couple of days ago, he said, "I'm a Trump man and when I say Trump Man, I mean Gary Johnson." He clarified, "The choice is, let's see, Do I want to poop my pants or do I want somebody else to poop my pants….I think I'll go with pooping my own pants. That ought to give you an answer right there."

Larry the Cable Guy (real name: Daniel Lawrence Whitney) indicated there was no way he'd vote for Hillary Clinton and that while he agrees with some of what Trump says, he's put off by "some of the things he says." In a wide-ranging conversation, Larry also weighs in on the controversy surrounding the refusal of San Francisco 49ers quarterback Colin Kaepernick to stand during pre-game performances of the national anthem ("that's the great thing about America—you have the right to do something like that—that's one of the greatest things about America; that and the cheese bread at Red Lobster"), what he considers unprecedented levels of political divisiveness, Obamacare ("I'm pretty sure it's not doing well"), and his new special, which is already streaming on Netflix.

.@GitRDoneLarry We need to talk. Call me.

While celebrity endorsements really mean very little in the grand scheme of things, this one is intriguing given Larry's working-class, common-man shtick. His routines are often taken simply to be racist, sexist, anti-intellectual gags designed to comfort rednecks and hillbillies (comedian David Cross made precisely this case years ago), but that's wrong, in my opinion. As often as not, his jokes satirize all elements of America, including the preferences and customs of his own apparent audience of "blue-collar" whites (he used to do a bit where he noted that illegal immigrants "don't speak no good English" in a way that undercut criticism of English as a second language) and he's a pretty sharp person (read this interview with The Onion's AV Club). To the extent that he "represents" the constituency that supposedly forms Donald Trump's core base, it's certainly interesting that he is openly (and in character) talking up Gary Johnson rather than the Republican nominee.