Trump visits Mexico before offering a laundry list of anti-immigration policy proposals at a rally in Arizona. 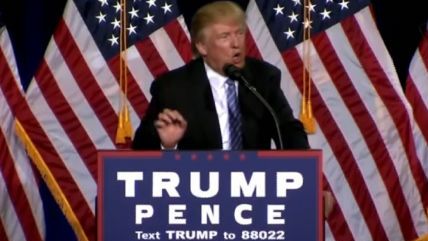 Republican presidential nominee Donald Trump visited Mexico today, in a trip his campaign described as a "relationship builder," before speaking at a rally in Phoenix in the evening, where he talked about his immigration plans, largely involving the border wall, deportations, and other police state measures. The speech was reportedly written by Stephen Bannon, formerly of Breitbart.com, and Stephen Miller, a former aide to Sen. Jeff Sessions (R-Ala.) who has taken a hard-line on immigration.

In Arizona, Trump told the crowd that immigration reform meant "amnesty, open borders, lower wages" and that the "fundamental problem with the immigration system" was that "it serves the needs of wealthy donors, political activists, and powerful, powerful politicians." At the rally, Trump painted a grim picture about immigrants overwhelming government services and contributing to higher crime rates (not true).

Trump also noted the attention paid to his immigration plans in recent weeks and said he'd make his plans clear to the crowd. "We will build a great wall along the southern border," Trump said to great applause and chants of build the wall, "and Mexico will pay for the wall, 100 percent." He said the wall would be "impenetrable, physical, tall, beautiful, southern border wall."

Trump said his ten-point plan also included an end to "catch and release" (praising Dwight Eisenhower's Operation Wetback) , "zero tolerance for criminal aliens," two bills named after victims, hiring 5,000 new border patrol agents (the number of border patrol agents has doubled since 2004), President Obama did), establishing a deportation task force ("maybe they'll be able to deport" Hillary Clinton, he said), ending the acceptance of refugees from Syria and the Middle East, stricter screenings, "ideological certification," turning off "the jobs and benefits magnet," and a litany of other severe measures that will require an expansion of government power and government spending. Trump insisted his plan would earn a "peace dividend" that could be spent on other government programs.

Earlier in the day, at a joint news conference with Mexico President Enrique Peña Nieto, Trump claimed he and Peña Nieto discussed the border wall but that "we didn't discuss payment of the wall." Peña Nieto tweeted afterward that he had made clear his position that Mexico would not pay for a wall across the U.S. border. The Trump campaign said the meeting was not a negotiation, which would have been "inappropriate."

Trump and Sessions and Rudy Giuliani, former New York City mayor, met with Mexico President Enrique Peña Nieto for about an hour before the joint press conference. In Mexico City, Trump pointed to five "shared goals" that would increase "prosperity and happiness" in both countries: stopping illegal immigration to the U.S. and to Mexico, a secure border, which he called a "sovereign right and mutually beneficial," dismantling drug cartels and "ending the movement of illegal drugs, weapons and funds across oru border," which would require "cooperation, intelligence and intelligence sharing, and joint operations between our two countries," improving the North American Free Trade Agreement (NAFTA), "a 22 year old agreement that must be updated to reflect the realities of today," and keeping "manufacturing wealth" in the Western hemisphere.

Trump called the migrant routes from Central America to the U.S. a "humanitarian disaster" that had to be solved. "It must be solved, it must be solved quickly," Trump said, "not fair to the people anywhere worldwide you could truly say, but certainly not fair to the people of Mexico or the people of the United States." Deportations by the United States and by Mexico have gone up in recent years, with the Obama administration ordering more deportations as recently as this spring.

Trump, of course, didn't mention ending the war on drugs, one of the surest ways to dismantle the drug cartels, as mainstream candidates in the U.S. and in Mexico by and large still do not, although he did say he would stop the flow of drugs into the country. The drug war is yet another significant exception to whatever conceit toward "non-interventionism" some of Trump's supporters believes he has.

On NAFTA, Trump insisted that wages had been going down in the U.S. for 18 years, a popular refrain also on the anti-trade left. "Improving pay standards and working conditions will create better results for all, and all workers in particular," Trump said of renegotiating NAFTA, "there's a lot of value that can be created for both countries by working beautifully together, and that I am sure will happen." Trump's America first anti-trade stance took a hemisphere approach in Mexico, where Trump said the two countries had to "keep manufacturing wealth" in the hemisphere. "When jobs leave Mexico, the U.S. or Central America and go overseas, it increases poverty and pressure on social services as well as pressures on cross-border migration," Trump argued. Since the passage of NAFTA, 25 million jobs were created in the U.S. and Mexico, and the economy has improved in other ways since the deal.

Peña Nieto said he had extended invitations to Trump and to Clinton. Clinton said she'd meet with the Mexican president at the "appropriate time."