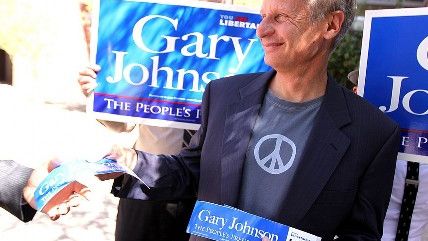 The advocacy group Iraq and Afghanistan Veterans of America (IAVA) is hosting its first ever presidential forum on September 7, which will "focus exclusively on issues the next president will have to confront as Commander-in-Chief," according to IAVA's website.

The hour-long event, which will be broadcast on NBC and MSNBC is not a debate, but rather a town hall-style event featuring the two major party candidates — Republican nominee Donald Trump and Democratic nominee Hillary Clinton — who will not be sharing the stage but will instead "take questions on national security, military affairs and veterans issues" from NBC moderators in front of a New York City audience comprised mostly of military veterans.

Notably absent from the forum is the presidential candidate far less likely than Trump or Clinton to create more combat veterans, Libertarian nominee Gary Johnson, which is almost certainly how the Trump and Clinton campaigns would prefer it.

Including Johnson in the forum would present an undeniable foreign policy alternative to the major party candidates, who at their recent respective political conventions did their best to outdo each other on selling the virtues of how hawkish their administrations would be. Trump and Clinton would be forced to explain to an audience loaded with service-people who have suffered through repeatedly failed military interventions why they — and not the non-interventionist Johnson — truly have their best interests at heart.

A recent unscientific poll of over 3,000 active military members conducted by Doctrine Man found Johnson trouncing the two "serious" candidates, with Johnson polling at 38.7 percent, Trump coming in at 30.9 percent, with Clinton bringing up the rear with 14.1 percent, according to The Hill.

It also appears that the military, much like the rest of the American voting populace, is completely turned off by both major party candidates. A recent Military Times poll of 2,000 active service-people found 61 percent stating they were "dissatisfied or strongly dissatisfied" with the idea of Trump as president. For Clinton, the level of dissatisfaction jumps to 82 percent. That same poll indicated that 13 percent of those polled intended to vote for Johnson in November.

On both Reddit and Twitter, there's an increasingly vocal push to convince IAVA to invite Johnson to appear at the Commander-in-Chief forum, which because it's not a debate is not subject to the arbitrary rules of the Commission on Presidential Debates that keep third party candidates polling below 15 percent in five major national polls from appearing on the high profile stage beside the Democrat and Republican.

Dylan Milroy, a U.S. Marine veteran who served in Afghanistan in 2012 and has been leading efforts on social media to advocate for Johnson's inclusion in the IAVA forum, told the Military Times that unlike Trump and Clinton, Johnson "is the only candidate with a sane foreign and intervention policy. There is nothing American about these massive government policies and programs that the Clintons want to fund with trillions of more tax dollars. There is also nothing American or honorable about Trump wanting to carpet bomb anyone that throws a pebble at our boots."

In an email exchange with Reason, Milroy added that his support for Johnson is not a "lesser of three evils vote" and that Johnson's "stance on national defense makes me ecstatic." Milroy adds that he has reached out to IAVA to discuss this issue but has yet to receive a response. Milroy wrote that IAVA is "supposed to be my advocate and they refuse to talk to me or my brothers and sisters. I am starting to get genuinely confused what their purpose is [sic]. If you want to ignore us that is fine, but don't claim to not ignore us."

Navy veteran Dave Olsen wrote in an email to Reason that he's voting for Johnson "because he is against foreign interventions. He wants to have free trade and dialog [sic] with all nations which would be counter to wars and aggression."

Olsen added, "we have killed and maimed far too many civilians and far, far too many of [our] own fine young Americans. It has to stop. War is Hell and should be avoided. We are not doing a very good job of taking care of our veterans after they come home either. We can be the leader in the world through free market trade and friendship and still have a very strong defense. I believe Gary Johnson stands for those same things." Of his hopes that IAVA would include Johnson in the forum, Olsen wrote, "veterans…have the right to hear all of the Presidential candidates' positions. Showing favoritism to the two main, old, corrupt parties is disrespectful to our military people and veterans."

IAVA states that the group represents over 190,000 veterans as a "nonpartisan organization and does not endorse political candidates of any party." Military Times reports that a IAVA representative confirmed the group is "looking into the issue" of inviting Johnson to the forum, but offered no additional comment.

After 15 years of war, it's an important and welcome development that IAVA has convinced the two major parties' candidates to address veterans issues, and getting Trump and Clinton to agree to the terms of the forum must have been a difficult feat. It is also understandable that IAVA would not want to rankle the two marquee names on the bill, but it would ultimately be a disservice to veterans if the reason Johnson is excluded from the forum is to provide cover for two war-hawks to lather an audience about much they "care" about veterans, all the while pushing foreign policies that will undoubtedly lead to more physically and psychologically damaged combat veterans.

Reason reached out to both the Johnson campaign and IAVA to find out if there have been any discussions to include Johnson in the forum, and this post will be updated if we receive a response.

Mark Kornblau, a spokesman for NBC, told Military Times that the network plans to invite Johnson to participate in a separate event to be aired on MSNBC "in the near future." It will address "the same set of issues related to national security and veterans," Kornblau said.