Binghamton University Hosts Training Session Called 'Stop White People,' But It's Not What You Think

Indoctrination for residential advisors? Maybe not in this case. 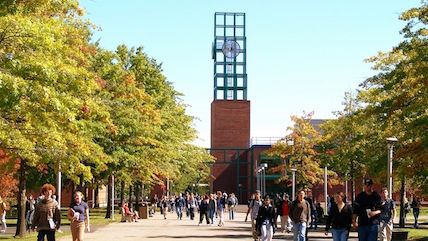 Binghamton University—one of the SUNY schools—apparently held an optional training session for residential advisors that was called: "#StopWhitePeople2K16."

The purpose of the session is to "help others take the next step in understanding diversity, privilege, and the society we function within," according to The Binghamton Review.

Of course, that seems like a difficult discussion to have if participants are proceeding from the assumption that white people need to be stopped, and stopped soon.

But the session isn't the outrage you might think it is, according to the university. A spokesperson told me the title was chosen as a bit of irony, and a range of topics were discussed—including "reverse racism."

"This week, the office of student affairs spoke with organizers and attendees of the session and—despite what many at the university feel was a poorly chosen name for the session—verified that the actual program content was not "anti-white," and that it represented a respectful dialogue among participants," a university spokesperson told Reason.

Campus Reform's Howard Hecht spoke with an RA who attended the session and didn't think it was "harmful or offensive."

My concern isn't that students are encountering offensive speech—on the contrary, I think students should be offended from time to time. Rather, my concern is that RA training is often more ideological than it ought to be, and that RAs go on to pressure the students who live under their rule to submit to indoctrination—a violation of these students free speech rights.

But it sounds like there isn't actually anything funny going on here.