The Clinton Foundation Was Clearly an Avenue of Access to Hillary

Dozens paid lots of money and got meetings. 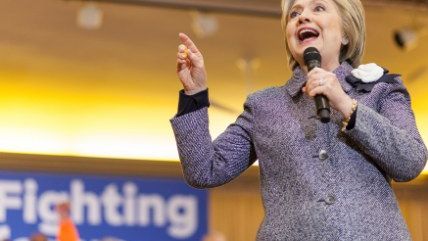 This is what "wrong within normal parameters" looks like in Washington, D.C. The Associated Press reports today that more than half of the non-government folks who met with Hillary Clinton when she was secretary of state gave donations to the Clinton Foundation.

The AP counts 85 out 154 people who either had meetings or phone conversations with Clinton as either donating themselves or through companies and groups. And this isn't chump change either. The total to the foundation from these people: $156 million. Here's what the AP found:

Donors who were granted time with Clinton included an internationally known economist who asked for her help as the Bangladesh government pressured him to resign from a nonprofit bank he ran; a Wall Street executive who sought Clinton's help with a visa problem and Estee Lauder executives who were listed as meeting with Clinton while her department worked with the firm's corporate charity to counter gender-based violence in South Africa.

The meetings between the Democratic presidential nominee and foundation donors do not appear to violate legal agreements Clinton and former president Bill Clinton signed before she joined the State Department in 2009. But the frequency of the overlaps shows the intermingling of access and donations, and fuels perceptions that giving the foundation money was a price of admission for face time with Clinton. Her calendars and emails released as recently as this week describe scores of contacts she and her top aides had with foundation donors.

The latest round of released emails prompted accusations of "pay to play" at the State Department. The response has been that providing "access" is not the same as actually providing "favors." The problem with such an argument is that "access" is in itself a favor. It's not like any of us proletarians could have gotten a meeting with Clinton.

Do keep in mind that the amount of money Paul Manafort, formerly of Donald Trump's campaign, is accused of funneling to U.S. lobbyists on behalf of interests in Ukraine and Russia is a pittance compared to the amount of money directed toward the foundation.

This shouldn't be taken a defense of Manafort's behavior or any of the lobbying went on back then. But rather it's a reminder of how this looks like outside the beltway. When the "normal parameters" look as bad as this, no wonder there's a significant number of Americans willing to ignore Trump's own form of awful financial behavior. And it helps explain why Clinton had such a hard time shaking off the likes of Sen. Bernie Sanders.