Crony Capitalism is a Feature (Not a Bug) of Obamacare

The Affordable Care Act (ACA) has always been an alliance of big business and big government. 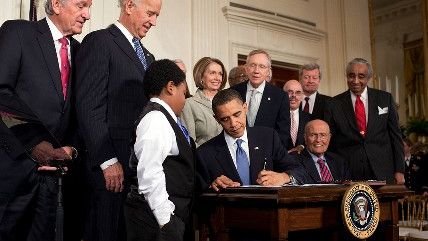 So a giant, rent-seeking insurance company is accused of having threatened to leave Obamacare's health insurance "marketplace" if the government didn't approve its giant merger. If true, this would be the least surprising development in the past six years of Obamacare fiascos. Any giant regulatory scheme bringing together big business and big government inevitably leads to cronyism and corruption.

Not long after the Justice Department blocked Aetna's merger with Humana, the company announced it would be scaling back participation in Affordable Care Act (ACA) exchanges. Now, Obamacare consumers in 11 states won't be able to keep their insurance, even though, one imagines, they like their plans. But choices are getting scarcer by the year. Aetna is now one of about a dozen major insurance providers that have dropped completely out or scaled back participation in exchanges.

A recent Kaiser Family Foundation study estimates that 664 counties will only feature one single insurer on Obamacare exchanges in 2017. In 2016, it was 225. Four entire states will have only one Obamacare insurer. In one Arizona county, there may be none. Since Obamacare, in effect, solidified in-state insurance cartels, the exchanges are starting to look very much the same. But opening markets up across state (and national) lines is a silly idea, I bet.

At first, Aetna denied that its move was connected to the Justice Department's merger decision. Even in the most generous reading, this turns out not to be exactly true. At The Huffington Post, Jonathan Cohn and Jeffery Young have gotten their hands on a letter from Aetna's CEO that critics seem to believe catches Aetna threatening the administration.

The correspondence has gotten Democrats very agitated, even though their policies are creating the problem. Even before the letter was uncovered, Sen. Elizabeth Warren (D-Mass.) and others lamented the rise of corporate power rather than the convoluted regulatory environment that fosters an unhealthy relationship between business interests and government power. Warren said, "The health of the American people should not be used as bargaining chips to force the government to bend to one giant company's will."

To be honest, although I have little doubt Aetna was hoping its position on the exchanges would help with the merger, the letter sounds less like extortion and more like a sensible decision that any accountable executives would make when their company is facing losses. The real outrage isn't that insurers like Aetna are abandoning Obamacare, but that companies like Aetna likely participated in Obamacare for cronyistic reasons to begin with.

The ACA has inhibited competition, which has only benefited big companies. Still, insurers are losing billions in the exchanges, and at some point it's too expensive to be in bed with Obama. Why would UnitedHealth, the nation's largest insurer, participate in a program that expects almost $1 billion in losses between this year and last? Aetna lost more than $430 million since January 2014, and it was expected to lose $300 million this year. Merger or no merger, Aetna would almost certainly stay in the exchanges if it made fiscal sense.

Democrats will face increasing pressure to make this social experiment work. For instance, according to The Huffington Post, the Justice Department asked Aetna CEO Mark Bertolini how the merger would affect his company's participation in exchanges. So it's not like Aetna collaged a ransom note together and mailed it to the president. The Justice Department was curious about how the merger might impact the administration's struggling health care policy — which is a political consideration.

Moving forward, would a company be looked upon more favorably by a Hillary Clinton administration if it continued to sell plans in the exchanges? Maybe. Should insurance providers that choose not to participate be concerned about retribution from the administration or vociferous hard-left senators? Will the government, for instance, uncharacteristically respond to an open-records request super-quickly to try and embarrass a company with some misleading letter? You never know, it might happen.

On the other hand, will insurance giants that still operate within the exchanges be able to make larger and larger lobbying demands from a government that is feeling increasingly pressured to save exchanges from death spirals? I guess we'll just have to trust them to work it out.

Democrats reacted to inevitable news that you can't regulate affordability into markets by offering even less dynamic ways to "expand coverage." Clinton has promised to bring back the "public option," which is still a euphemism for a government-run insurance program that would be completely detached from the price of health care and, like every similar program, turn into a giant unfunded liability that never stops growing.

You'll remember also that when debating Obamacare, Democrats regularly demonized the insurance industry for profit-mongering (always an overblown assertion). Today, Warren demands that insurance companies lose money to help keep Obamacare solvent. These shortfalls are hidden taxes collected by insurers and paid for by consumers — for economic patriotism, I guess.

As a welfare program, Obamacare might be a success. (Insurers that focus on Medicaid sure do well) As a business, though, not so much. So it's worth noting that when liberals celebrate Obamacare enrollment numbers or other successes, these fabricated "marketplaces" feature subsidized products sold to consumers who are compelled to participate or pay fines. Yet even then, they hemorrhage companies and dollars and breed the kind of cronyism that Americans claim to hate.