All Aboard This History Piece on the Queen Mary 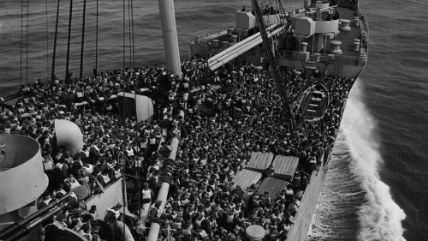 (Courtesy of the Queen Mary)

The most interesting thing about the Queen Mary, which for several decades was the largest passenger ship ever built, is not the 20-foot propellers so perfectly balanced that they could be spun with a flick of the wrist; or the 35,000 tons of metal that went into its construction; or the 10 million rivets that hold the whole thing together. It's not even the still-mysterious question of how the ship became the springboard for the very first cheap-shot joke about Joan Collins. (Q. What's the difference between Joan Collins and the Queen Mary? A. It takes a few tugs to get the Queen Mary out of her slip.)

No, the really special thing about the Queen Mary is that it was one of the epic government bailout boondoggles of the 20th century. In 1931, barely a year into the ship's construction, the Cunard line went broke. The British dutifully forked over a loan of a staggering 9.5 million pounds—that's $684 million in 2016 dollars—to keep the company afloat (dreadful pun not intended until I actually typed it). Which, as the documentary Mighty Ship at War: The Queen Mary notes, saved a whopping 2,000 jobs—at $342,000 a pop, I can only conclude that shipping lines employ a lot more neurosurgeons than I was aware—and, more importantly, England's image: "Great Britain was at risk of losing its reputation as the world's leading maritime nation."

Its wide-eyed admiration of pork-slinging statecraft aside, Mighty Ship at War is a peppy and quite watchable little documentary about an oddball chapter in maritime history: the conversion of luxury liners into troop transports during World War II. When war broke out in Europe in 1939, unleashing German submarine wolfpacks on commercial shipping in the Atlantic, the cruise ships were drafted just like able-bodied men. They even got the maritime equivalent of a GI haircut, repainted a dull naval gray while their posh staterooms were ripped out to make way for towering stacks of bunks.

Even before its military makeover, Mighty Ship at War relates, the Queen Mary had found its business model remade by Europe's gathering war clouds. Because the ship's London-to-New York route included a stop in Cherbourg, France, it became the escape route of choice for many Jews fleeing Europe. Even families of modest means often traveled in plutocratic splendor, blowing their life savings on first-class tickets, because the Germans would confiscate any money or valuables the refugees tried to carry with them. "Give the money to the Brits, not the damn Nazis," one refugee who made the crossing as a small child remembers his parents saying. By early 1939, every London departure of the Queen Mary was sold out.

The soldiers who followed the refugees, heading to England as part of the forces that would invade first North Africa and then France, didn't have such rococo surroundings. The Queen Mary was stripped for action, carrying an entire division (between 15,000 and 16,000 troops) at a time, the men crammed together in a fashion that would make sardine cans seem spacious—especially at night, when everybody had to stay below deck so the glow of their ubiquitous cigarettes wouldn't call the attention of enemy aircraft. There were so many men aboard that they could only be fed twice a day; by the time they finished filing through the mess lines for breakfast, it was time for dinner.

The ship's swimming pools and cocktail lounges had been removed, of course, and military police had even been instructed to keep the men from shooting dice or playing cards. "That didn't work out too well," recalls one American soldier who made the crossing. The MPs had somewhat better luck barring men from the small barracks area created for the female WACs, but then discovered to their surprise that it was even harder to keep the women in.

Not everybody who sailed on the Queen Mary was a grunt headed for the meatgrinders of Normandy or Bastogne. Winston Churchill crossed the Atlantic on her three times to meet with Franklin Roosevelt, sometimes with nearly the entire British high command. Even today in Long Beach, where the Queen Mary is anchored as a floating hotel and restaurant, you can stay in the Winston Churchill Suite, complete with a breakfast nook and two bathrooms, the latter possibly in homage to Churchill's two memorable naked encounters in White House tubs: One with the ghost of Abraham Lincoln, who merely smiled and faded away, and one with the very flesh-and-blood FDR, who had blundered through the wrong door. "As you can see, Mr. President, I have nothing to hide from you," Churchill exclaimed.

In its civilian days, the Queen Mary had set, broken, and reset records for speed in crossing the Atlantic. Though it could still outrun any military ship, the Queen Mary no longer made the trip in under four days because it continuously zigged and zagged, changing course literally every 15 minutes, to evade Hitler's bounty-hunting U-boats. (An Iron Cross and a quarter of a million dollars were promised to the captain who could sink the Queen Mary.)

The tactic evidently worked pretty well—the Queen Mary didn't come under fire once during the entire war. The ship nonetheless had a couple of near-catastrophes, including nearly being capsized by a wave of stupefying proportions that came out of nowhere, the inspiration for The Poseidon Adventure. Even more disastrously, in 1942 it collided with one of its escort ships, the Royal Navy cruiser Curacoa, just off the coast of Ireland. Under strict orders to slow for nothing, the Queen Mary continued on its way; the Cuacoa, sliced in half, sank, taking more than 300 crewmen with it.

The war over, the Queen Mary went back into civilian service, but by the 1950s was facing serious competition from passenger airlines, who could hop across the Atlantic in a fraction of the time and cost. In 1967, the ship retired from the sea and returned to its roots in government boondogglery, purchased at a premium price by the city of Long Beach as a tourist attraction. It's been in dubious financial health ever since, a subject on which Mighty Ship at War maintains a discreet silence. Also not mentioned: For a decade or so, it was anchored right next to another mythic lesson in crony-capitalist cozenage: Howard Hughes' wooden troop-transport plane, the Spruce Goose, which consumed $23 million in developmental costs and quietly expired after a single flight lasting about 60 seconds. It's not clear if the two ever met, but, really, somebody must be the parents of the Bridge to Nowhere.