How does this square with the candidate's stated foreign policies? 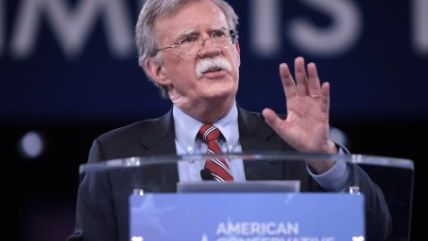 When George W. Bush nominated John Bolton to be his ambassador to the United Nations in 2005, it was cathartic for many conservatives, who had been stewing for years over the bureaucracy at Turtle Bay. A working-class guy from Baltimore with a Yosemite Sam mustache, Bolton had once opined that if U.N. headquarters "lost 10 stories, it wouldn't make a bit of difference." It was easy to imagine him hurling abuse and possibly heavy objects at gelatinous U.N. functionaries as they fled down the hallway.

Alas, Senate Democrats filibustered Bolton's nomination, limiting him to a recess appointment. His term was brief, controversial, and idealistic, as he set about trying to reform the U.N.'s farcical and mass murderer-dominated Human Rights Commission, which earned him rare praise from the New York Times. So when Donald Trump announced he was mulling Bolton to be his secretary of state, it seemed like a solid pick. Who wouldn't want a sworn foe of bureaucracy at the cumbersome State Department?

The problem with Bolton isn't his aversion to the UN, but his penchant for counterproductive war. Whereas Trump, for all his faults, has laid out a foreign policy that attempts to correct some of the mistakes of the past (even if it ultimately replaces them with new ones), Bolton remains immersed in the failed thinking of the Bush administration.

On the calamitous invasion of Iraq, he remains steadfast. "I still think the decision to overthrow Saddam was correct," he told the Washington Examiner last year, and anyway, "you can't assume if [Saddam] had stayed in power, sweetness and light would prevail in the Middle East today." That's true, but you can assume that if Saddam had been removed from power, mayhem and madness would prevail in the Middle East—because that's exactly what happened.

Bolton's support for regime change has remained a constant. In March 2011, he declared that the United States should assassinate Libyan dictator Moammar Gaddafi and "end the regime right there." At the time, Gaddafi had surrendered his WMDs and was aiding the war on terror; after the Obama administration destroyed his government, Libya disintegrated into anarchy and ISIS opened up shop. The president, guilty of taking Bolton's advice, was later excoriated by Bolton for being weak on Libya.

On Iran, Bolton's prescription was to drop bombs, and then, once that was accomplished, to drop more bombs—all of it "aimed at regime change in Tehran." Heeding his counsel would have torn open a vacuum as Iranian moderate and hardline elements duked it out to replace the deposed government, and the Islamic State would have attempted to fill the space, eager to strike at the heart of Shiite Islam. It also would have crippled the anti-ISIS campaign in Iraq, which is heavily dependent on Iran-linked militias.

The goal of bombing Iran's nuclear program, Bolton wrote, was, "rendering inoperable the Natanz and Fordow uranium-enrichment installations and the Arak heavy-water production facility and reactor." Today, all those sites are subject to daily weapons inspections, Fordow is being converted into a research center, and Arak has been filled with concrete, all thanks to diplomacy, not war.

Still, at least Bolton was merely advocating conventional ordnance against Iran and not thermonuclear war. During a speech in 2009, he said, "Unless Israel is prepared to use nuclear weapons against Iran's program, Iran will have nuclear weapons in the very near future." He was wrong again: Israel didn't nuke Iran and Iran today doesn't have nukes.

Even when Bolton finds a way around destructive policies, he still manages to lasso his ankles in the process. "I would vote against an authorization to use force," he said in 2013 of the Obama administration's plan to attack Syria's Bashar al-Assad. But this was merely a matter of timing: "In the days just after Saddam's ouster in 2003, conditions were optimal (if nonetheless imperfect) for overthrowing Assad," he wrote. Yes, because then we would have opened the Syrian front to jihadists nine years earlier and saddled our financial books with the rebuilding of two nations. What could have been more brilliant than that?

John Bolton might be allergic to U.N. meandering, but he's also chemically addicted to regime change. He never plans for the day after a binge. He can't break his habit even after the wicked hangovers of Iraq and Libya. Those who try to wean him off are shouted down. And if Trump puts him at the State Department, it's the rest of us who will end up with his tab.

Matt Purple is a fellow at the American Security Initiative Foundation.