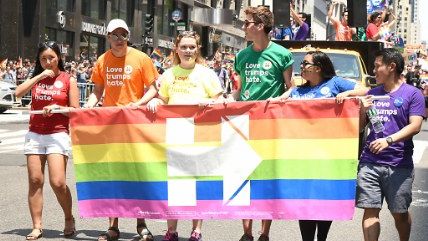 It may seem as though the Democrats will own a dominant chunk of the gay vote this election (again), regardless of the small—but symbolically significant—pushes by the Republican Party to be more friendly and supportive of the community, even if policy goals don't align.

Mark Lee is an opinion columnist at the Washington Blade, an LGBT-targeted publication in the nation's capital. He has been writing about the growing discontent with the two major parties and is questioning whether Hillary Clinton will get the same level of the gay vote as previous Democratic candidates have received. Lee doesn't really have facts at the moment to back him up, but given that Clinton has such high unfavorable ratings, it is worth wondering how many gay voters might be looking elsewhere:

Similar to all Americans, one-quarter of LGBT voters indicate they don't support either major party nominee. The high degree of dissatisfaction with both of these notorious grifters has the net effect of lowering Clinton's tally of LGBT votes.

An astounding 41 percent of Americans have recently said they are having difficulty choosing between Clinton and Trump because they believe neither would make a good president. LGBT voters are undoubtedly among them.

When given the option, 13 percent told a polling firm aligned with Democrats they'd prefer a giant meteor hitting earth than being forced to chose either Clinton or Trump. The disaffected among those under 30 represents a plurality. With the largest bloc of voters now self-identifying as independents, more than a quarter of the unaffiliated would chose annihilation.

A poll of LGBT likely voters back in May showed overwhelming support of Clinton compared to Trump: 84 percent to 16 percent. Right now those numbers show Clinton performing better than Barack Obama did in 2012 with the LGBT vote. Exit polls from 2012 showed Obama getting 77 percent of the LGBT vote and Mitt Romney getting 23 percent.

But also of interest in the Clinton-Trump poll: Those polled were not presented any third-party options, and 22 percent of the LGBT voters polled identify as "independent" (outnumbering the 15 percent that identify as Republican).

Given Gov. Gary Johnson's pro-gay positions (some of which are subject to libertarian criticism because Johnson simply hasn't made good arguments justifying further government intrusion that reduces religious liberty and freedom of association—and for many libertarians, these policies are a violation of the non-aggression principle), there's certainly opportunity for him to land some of the LGBT vote.

But what's also different about this race is that Clinton has jumped aboard and declared support for every single political goal put forward by the most powerful of LGBT activist groups. This is not an election where there's been any equivocation or attempts to walk some line to appeal to more conservative, religious Democrats in Southern states. Clinton has publicized a pro-LGBT federal policy agenda that supports passage of a whole host of new laws.

So to the extent that she loses LGBT votes, it seems as though the likely candidates are: Those who put other priorities ahead of LGBT issues and find the Dems wanting (essentially, likely the same pool of gay voters who have already been turning away from the Democrats); those who have concluded that we've reached the point where don't actually need additional federal regulations on LGBT issues in order to lead happy, free lives (that's guys like me, but I admittedly may be overestimating how many of us fit in this category); and those who really, really don't trust Clinton based on her background of, well, not being very trustworthy.

When I look at those categories, I suspect we may not see a significant difference in numbers for Clinton come November compared to previous elections, but given the nature of the race this year, I'm truly hoping exit polls ask gay and transgender voters about third-party candidates, at least Johnson and the Green Party's Jill Stein.

I do suspect what might be likely is that we may see a big drop in turnout, and that's probably not going to be accurately reflected in the exit polls, for obvious reasons. Both candidates may receive fewer votes than the presidential candidates in previous elections, but that won't necessarily change the percentages. The Republican base resisted the opportunity to update its party platform to be more gay friendly, and while there was some significant outreach to gay voters at the convention, it was really heavily focused on making LGBT folks feel included in the push for stronger interventions to protect against Islamic terrorism within the United States. Trump's rather erratic campaign and the unclear future of the GOP has left gay conservatives somewhat divided.

There is a huge opportunity here for Johnson among LGBT citizens who don't see themselves as fellow travelers in the progressive movement just because of their sexual orientations or gender identity. It may also be an election where a chunk of LGBT voters just throw up their hands and walk away from the two parties.