Gary Johnson and the Rise of Libertarian Centrism

Why moderate Republicans like Susan Collins and Mitt Romney are flirting with the Libertarian Party presidential ticket. 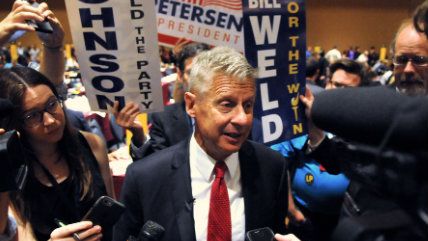 On CBS's Face the Nation Sunday, Sen. Susan Collins of Maine became the latest well-known Republican to flirt with the unthinkable. "I'm taking a look at the Libertarian ticket," said the lawmaker, a veteran centrist.

That puts her in company with Mitt Romney and Jeb Bush, who earlier this summer said they were considering a vote for Libertarian candidate Gary Johnson, the former New Mexico governor. After expressing dismay at the choice of Democrat Hillary Clinton and Republican Donald Trump, Collins joined Romney in effusively praising Johnson's running mate, former Massachusetts Gov. Bill Weld, with whom she had worked on various projects.

As with so much in 2016 politics, a pattern is beginning to emerge that might have been hard even to imagine a year ago. When libertarian candidates have made inroads in the GOP in the past, it has often been in some of the party's rightmost precincts. But Johnson and Weld thus far have enjoyed little success (and, to be fair, shown little interest) at wooing the most conservative elected officials and pundits. While the Libertarian ticket has been drawing an entirely unprecedented 8-10 percent in national polls, little of its energy comes from the Republican base. Instead, it is making noticeable gains in the center.

In one communication after another, the Johnson-Weld campaign strikes a theme seldom associated with past libertarian campaigns in the US: moderation. It is the "sane" choice, the "responsible" and "adult" ticket, the ones happy to work with the best people and ideas from both parties, campaigning not on fear and anger but on a positive message of problem-solving. A recent Johnson video contrasts a bickering, shouty Trump and Clinton with the cool-and-collected libertarian alternative.

As a more or less lifelong libertarian I'm still getting used to the idea of its being the middle position in an election, the oasis of sanity, the haven from extremism. But win or lose, I don't think this campaign will be the last of what I've come to call libertarian centrism. That position has a logic of its own, as well as a considerable historical pedigree.

Start with the truism that democratic politics is the play of factions based on identities, interests, or social roles. Libertarians commit on principle to upholding rights for all and a strong rule of law. That can make us a balance wheel against the politics of factional revenge. When Group A is in power, libertarians speak up against measures oppressive to Group B; when Group B gets its innings, libertarians warn of the dangers of the measures it takes against Group A.

In Europe liberal parties, often seen as the nearest analogue of libertarian, are often perceived in just this way as occupying centrist/middle positions between labor or revolutionary parties on the left and blood-and-soil or religious parties on the right. European liberal tendencies vary but often they're secular, business oriented, pro-trade, modern, internationalist but not militarist, and interested in meliorist reform rather than street politics or national crusades. Sound familiar?

So on general principle we shouldn't assume that if you squeeze the libertarians out of the GOP coalition, they'll pop out on the far right. (Or far left.) They might pop out in the center instead, as Bill Weld clearly has and Gary Johnson shows signs of doing as well.

When the news spread on Twitter about Collins's comments, the reaction from many libertarian and conservative quarters alike was revealing: a groan. After all, Collins has a not-very-libertarian voting record in the Senate. If she would consider a vote for Johnson and Weld, doesn't that prove they're sellouts?

But as David Frum once said in another context, if you find yourself under the same party roof with someone who agrees with you on basically nothing, congratulations! That's how parties win in the United States, by assembling different kinds of people who come in for entirely different reasons. Instead of apologizing for more-or-less libertarian candidates who can win votes from non-libertarians, we should study them.

I came to appreciate this truth last year when I wrote a long piece about Northeastern Republican governors for The Washington Examiner. When I started, thinking of the late Nelson Rockefeller and a few others of his ilk, I imagined this group to be a sort of GOP mutation that, occasional social issues aside, omitted the liberty gene.

But that was unfair, as I learned when I looked more closely at the example of Gov. Weld and others. Republican chief executives in the Northeast often make a broader liberty appeal. As the biennial report cards on governors from my own Cato Institute showed, they are on average markedly more fiscally prudent than Democratic governors in their states. They are less inclined toward heavy regulation, and often shake up education or welfare systems to good effect. Most of them define themselves to some extent or another as outsiders facing down unaccountable public agencies and big-city machines. Saving taxpayers a buck is only one of the reasons to stand against government-as-racket—as the former prosecutors in the bunch, like Weld, know well. Honest and efficient government is a favorite preoccupation of GOP moderates in Democratic states—and there's no reason for libertarians not to be there with them.

For libertarians in US politics to take on some attributes of a center party, as in Europe, does not guarantee success as an independent force. Quite the contrary. Our first-past-the-post system systematically tends to squeeze down choices to two, with center splinters faring no better than left or right. The German Free Democrats, despite an illustrious history, have come on hard times and are now shut out of representation in the Bundestag. Parties with similar traditions have struggled lately in Sweden, Italy, the United Kingdom, and elsewhere, though they form governments in several other European countries either alone or as part of coalitions. Where voting rules create pressure for a two-party system, classical liberals may be left with little choice but to join a larger though less congenial party and work within it.

The wider significance may come after November, when it comes time to pick up the pieces, whether or not as part of a broader party realignment. It'll play out in how libertarian ideas are regarded by others—and in how libertarians regard themselves.

Contributing Editor Walter Olson is senior fellow at the Cato Institute and the author of several books on law. He was appointed by Maryland Gov. Larry Hogan as co-chair of redistricting commissions in 2015 and 2018.