If Donald Trump gets the chance in November. 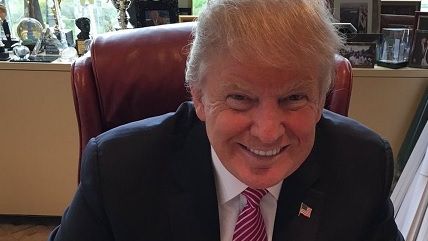 Every day, the odds that Donald Trump will be the next president of the United States are going down. Trump's chances of winning the election are at 19.4 percent according to ElectionBettingOdds.com, down from 30 percent three weeks ago. The Republican National Convention was not followed by a pivot in either tone or substance by Trump, as some expected.

Last year, internet fans of Donald Trump started using the term "cuckservative" to describe conservatives who were skeptical that Trump, a life-long New Yorker with a history of donating to Democratic politicians and holding conventionally Democrat positions on issues like taxes, abortion, and guns, would be a competent standard-bearer for the Republican Party. The whole thing was ridiculous from the beginning. The "cuck" part comes from "cuckolded," a term to describe a man whose sexual partner, unbeknownst to him, produces offspring by another man. If anyone was being cuckolded it was Republicans that were supporting the one-time Democrat who displayed an ignorance of basic conservative and Republican principles.

Trump, of course, eventually became the Republican nominee, and continued to say things that weren't simply not conservative but showed a disdain for conservative principles. Talking about the minimum wage, Trump said it wasn't "very Republican" to say "you need to help people." Last week he joked that "Second Amendment people" might be able to do something about a putative President Clinton's anti-gun judicial picks, playing on a liberal trope that legal, law-abiding gun owners are all actually just one step away from exercising their right to revolt.

At the Democratic National Convention, President Obama noted that Trump was neither a conservative nor a Republican. It was not a particularly self-serving observation. Obama was re-elected in 2012 after running a campaign in which he tried to portray the moderately conservative Mitt Romney as "severely" conservative—something Romney himself pushed when seeking the nomination. Democrats have spent a lot of time demonizing Republicans and conservatives, so its noteworthy the president would point out Trump is neither. It's true. In that sense, Republicans have already been cucked. When Trump said Obama was the founder of ISIS, Republicans like Rudy Giuliani came out to defend his statement. Then he said he was being sarcastic. Trump has fucked with Republicans in this way for months, because he isn't one of them. Neither is he a conservative, constitutional or otherwise. He's barely mentioned the Constitution, for example, and his supporters like Ann Coulter and Sean Hannity have taken to describing him more often as a populist than a conservatives.