Mom: My Son's Daycare Provider Reported Me to CPS. Because of a Birth Mark. 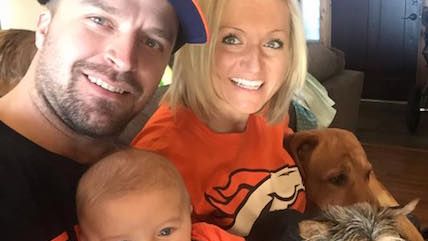 It's been quite a week for Tamara O'Haire, a cowgirl and online fitness trainer from Bozeman, Montana. O'Haire is a mother to a 9-month-old boy. On Monday, she put him in daycare for the very first time.

On Tuesday, Tammy got a call at work—a cattle feedlot—from Child Protective Services. The agency had to meet with her immediately. She and her husband were suspected of child abuse. The daycare center had called CPS to report a bruise on the baby's chest.

But it wasn't a bruise. It was a birthmark.

According to O'Haire, the daycare—Roots Nature School, which offers "nature-based childcare and preschool"—made no attempt to contact her about the alleged bruise. The school, "went straight to the state, assuming we are beating our child," O'Haire wrote on Facebook.

The daycare provider later told O'Haire that she thought the mark on the child was either a bruise or a rash. But there's a pretty huge difference between a bruise and a rash (although bruises, like rashes are often innocent—kids bump into things).

On her own Facebook page, Roots Director and Lead Teacher Aysha Carter said she stood by her decision to call CPS, though noted it was a tough call.

"If I had to redo it, I would have done the same thing," she wrote. Carter was not immediately available for comment.

Tammy made an appointment for her and her husband to meet with CPS on August 10. But first thing that morning, she took her son to the pediatrician."She examined him—she's been his pediatrician since he was six days old," said O'Haire in an interview. "She confirmed it was a birthmark and not a bruise." The doctor even wrote a note.

What's more, O'Haire has posted Facebook photos of her son every month on his birthday. The birthmark showed up at around five months. She had four time-stamped photos of this "bruise."

At her CPS appointment, they were joined by a sheriff. O'Haire showed them the photos and the doctor's note. The sheriff's response?

"The sheriff told us that he thought the birthmark looked like a handprint," O'Haire recalled.

At that point, says O'Haire, "I was a blubbering mess. I think this is standard protocol—they have to take everything very serious. I've been hearing this, 'If there's any sign of any suspicious marks on any child, it has to be reported to the state.' So that was their rebuttal."

But this approach is comically misguided.

And yet, O'Haire and her husband must appear before CPS and the sheriff again in three weeks. Until then, their case is open.

The one silver lining, O'Haire said, is this: After she posted about her troubles on Facebook, "a lot of other moms have opened up about their stories. One mom said that she got called into CPS because she missed [her child's] checkup. Another mom shared how one of he children had a similar situation where a birthmark looked like a bruise and she got called in, too. Another woman told me she was involved in a similar situation with CPS. So I'm just happy that I'm spreading the word about this."

These stories illustrate the fact that we must kill off the notion that overreacting to nearly non-existent threats is prudent. As one parent wrote in support of the day care provider on the provider's page, "I would rather see 1 million reports that end up not being an issue than see even one go unreported and lead to serious injury or the death of a child." We have to stop framing the issue like that. If the system is reporting one million unfounded cases, that is a million distraught families. This is not something we have to just shrug off in the name of child safety. We cannot allow hysteria to trigger government involvement.

And finally, if the sheriff has so little to do that he is hallucinating handprints, he needs a furlough. Starting now.