There are 48 foreign-born athletes on Team USA in the Summer Olympics, including one that already won a medal. 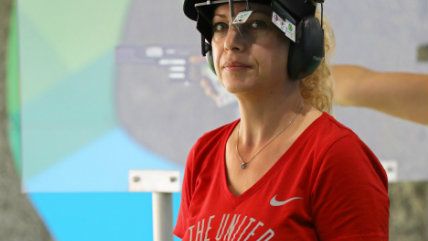 The last time Enkelejda Shehaj competed at the Olympic Games, she was representing Albania.

That was in 1996. Three years later, with the government of her home nation collapsing and fearing for her family's safety, Shehaj flew to the United States with two suitcases: "One with my clothes," she told NBC Sports. "And one luggage, it sits there in my closet with all my medals, magazines, articles that were written about me and all the diplomas and everything that had related to the sport. That's it."

Shehaj completed the complicated process to become a U.S. citizen in 2012 and this week she's back at the Olympics, competing as a member of the U.S. team in Rio de Janerio.

Her story is one of the more dramatic ones, but Shehaj is far from being the only immigrant competing for the Stars and Stripes at this year's Summer Olympics. According to research from Alex Nowrasteh, an immigration policy analyst for the Cato Institute, there are 48 members of the Team USA who were born in other countries.

Edward King is another foreign-born Olympian, but this isn't the first time he's proudly represented his adopted homeland—though he was born in South Africa, he's been an officer in the U.S. Navy since 2011. King finished 10th this week as a member of the men's lightweight four rowing team.

Phillip Dutton made a bit of Olympic history this week. The Australian-born equestrian rider became the oldest American, at age 52, to win an Olympic medal when he claimed the bronze in individual eventing—a sport that combines three different horseback riding skills. Like Shehaj, Dutton had previously competed in the Olympics for his birth country before immigrating to the United States and becoming a U.S. citizen.

There's also Danell Leyva, the Cuban-born gymnast who gave maybe the best sound bite of the Olympics when asked about the number of condoms in Rio's Olympic Village. (There are reportedly 450,000 condoms available. "Will that be enough?" was the question. His reply: "For me?").

All told, there are 554 Americans competing at this year's Summer Olympics—the largest contingent from any single country. With 48 immigrants among them, that means 8.5 percent of Team USA was born in another country. That means immigrants are actually underrepresented, since they make up 13.3 percent of the U.S. population, Nowrasteh notes. The largest plurality of foreign-born American Olympians (11 of them) are competing in the track and field events, which got underway on Friday afternoon.

There's no accurate way to count the number of U.S. Olympians who are the children of immigrants, but that number would presumably be much larger.

The United States' foreign-born Olympians come from all over the world. The 48 competitors were born in 30 different counties on six different continents. Their reasons for coming to the U.S. are probably as diverse as those of any other set of immigrants to this country, but as highly skilled athletes they do have an advantage over other immigrants because they often qualify for EB-1 visas reserved for immigrants "of extraordinary ability in the arts, science, education, business, or athletics."

It makes sense to give some people a "fast lane" to becoming U.S. citizens if they have important skills—yes, you could argue about whether Olympic sports should count as important skills, but sports-based-nationalism isn't going away anytime soon so that's not going to change. If you're not an Olympic-caliber athlete, though, navigating the immigration process can be virtually impossible.

That's a shame, because immigrants make the country better off, and not just at the Olympic Games.

Despite the political rhetoric coming from portions of both major parties, immigration actually stimulates the American economy and generates more business. Rather than displacing native-born workers, both high-skilled and low-skilled immigrants complement and enhance the work force, according to research from the Manhattan Institute.

Shikha Dalmia, in the August edition of Reason, points out that globalization (and the immigration that comes with it) in the past few decades has helped America's middle class achieve a higher level of prosperity. Expensive wars and government-run entitlement schemes have done the most damage to the economy, not immigrants.

In short, you shouldn't have to be able to do the high jump or hurdle your way through years of red tape to get a visa or become an American citizen.