There's been talk about a Roger Stone/Julian Assange plot, but the evidence being offered is pretty slim. 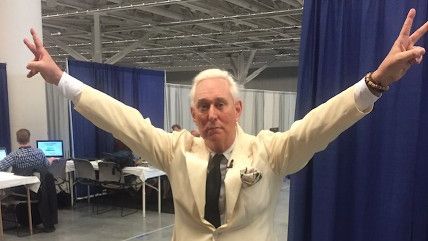 This went up on Media Matters' site yesterday:

Stone is a longtime political operative now aligned with Donald Trump; Assange is the man behind WikiLeaks, the website that released a trove of the Democratic National Committee's internal emails last month. The Media Matters post consists of a brief exchange at a speech Stone gave Monday, when an audience member asked about Assange's plans to release damaging documents on Hillary Clinton before Election Day.

You can see why this would interest Trump supporters, who could use another Clinton scandal right now. More important, given Media Matters' liberal orientation, you can see why it would interest Clinton supporters: They'd love to link WikiLeaks to Stone, whose history makes him a good right-wing villain. And so the post has picked up traction online, with phrases like "unholy alliance" and "proof Assange is working directly with Roger Stone" sloshing through the Twitterspere. It has percolated into the press, too: Over at The New Republic, Jeet Heer declared that "Roger Stone and Julian Assange [are] in cahoots."

None of which is really supported by what Media Matters published. Stone isn't an entirely reliable narrator to start with, and I would not take his claims as "confirmation" of anything. But if he's telling the truth, it's not a very meaty truth. Here's the exchange:

Q: With regard to the October surprise, what would be your forecast on that given what Julian Assange has intimated he's going to do?

A: Well, it could be any number of things. I actually have communicated with Assange. I believe the next tranche of his documents pertain to the Clinton Foundation but there's no telling what the October surprise may be.

So: Stone "communicated with Assange" in some way. Stone communicates with lots of people. (Even me! I've interviewed him!) His interaction with Assange does not seem to have included any details about what the big "October surprise" is supposed to be, given that Stone says "there's no telling" what it is. It is possible, I suppose, that he knows more than he's saying, but the news here is supposed to be that he "confirmed" something. If this is cahooting, a postcard is a hug.