'You're Fired' Is How Trump Says 'Change'

It's not the voters that Trump wants to fire; it's the politicians, bureaucrats, and coastal establishment elites. 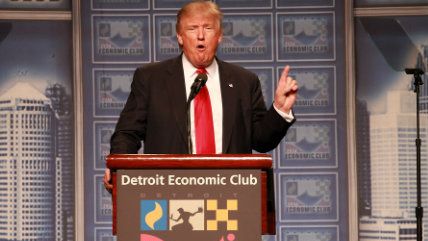 The presidential election may hinge on the meaning of two words: "you're fired."

The Democratic vice presidential nominee, Tim Kaine, used a variation on the same theme while campaigning in Greensboro, N.C.: "We want a 'You'rehired' president, not a 'You're fired' president."

Intentionally or not, the Democrats are distorting the way Trump and his supporters want to use this phrase. It's not the voters that Trump wants to fire; it's the politicians and the bureaucrats and, on some level, the whole class of Ivy League educated coastal establishment elites. In that sense, at least, he really is running a Nixon-like campaign.

Trump wants to fire Joe Biden, who was first elected to the U.S. Senate in 1972, nearly 44 years ago. He wants to fire Senator Kaine and Secretary of State Clinton. He wants to fire the whole crew of incumbent politicians—maybe even Speaker of the House Paul Ryan—who have presided over decades of nonexistent middle class wage growth, endless non-victorious Mideast wars, bad trade agreements, and falsely professed support for secure borders.

If Biden can't understand how voters might feel some pleasure in firing the whole political class and sending them home, then he himself may be the one lacking empathy and compassion.

For a corrective, I recommend an article by David Blankenhorn in the American Interest headlined "Listening to Trump Voters." One voter says of Trump, "he is not a typical politician, and I'm fed up with typical politicians." Another one says of establishment politicians, "we're tired of them getting nothing done. They get richer and we just again suffer. I am tired of it." Another says, "I'm sick of all of them. They're all stupid—working for themselves instead of for their country, and fussing among themselves, like these idiots have been doing. The President, the Supreme Court, the Senators and Representatives—most of them are crazy and all of them should be kicked out of office. Clean out the whole bunch."

It's like that bumper sticker that says if you're not angry, you haven't been paying attention.

That's true on foreign policy. Nearly 15 years after the September 11, 2001, terrorist attacks, the Islamists control an entire new country, the Islamic State, that covers parts of Iraq and Syria, and they've inspired deadly attacks in Orlando, San Bernardino, Paris, Brussels, and Nice. Veterans who served America in those wars face scandalous and interminable waits for government-provided health care. And President Obama sends $400 million in cash, in foreign currency, to Iran stacked in wooden pallets, on a cargo plane.

And that's true on domestic policy. While unionized teachers get richer, too many urban and rural public schools are still embarrassments. Despite trillions of dollars in spending on the "war on poverty," too many Americans are mired in poverty. Many young hardworking Americans, even well educated ones, feel they lack the security and prosperity that was available to their parents. Meanwhile, the Clintons collect millions of dollars in speaking fees from Goldman Sachs while proclaiming that they will rein in Wall Street with regulations. Relations between the police and the back community are so bad that it is front-page news.

Whether enough voters are angry enough to turn out and make this a "change" election against the "Secretary of the Status Quo" Hillary Clinton is a question that won't be answered until Election Day. If Trump does win and then fails to deliver improvements for these voters, their levels of anger and cynicism will only increase.

But if Biden, Hillary Clinton, or for that matter, their cheering section at The New York Times op-ed page, can't comprehend why Americans would be angry enough to want to fire someone, they've been in Washington for so long that they are out of touch. Clinton already let herself get beat once, in 2008, by a "hope and change" candidate. Trump's words for change are "you're fired."