Renegotiating TPP would reduce its effectiveness. 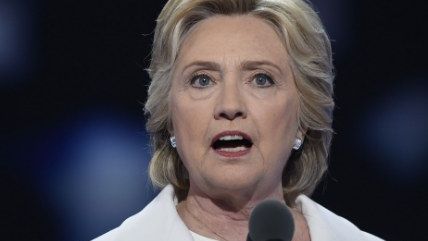 While Trump's belligerent mercantilism gathers support among voters and elected Republicans, it's easy for committed free traders to find themselves in support of Hillary Clinton. To be sure, Clinton has offered her own condemnations of trade and globalization, but beside Trump's near-total ignorance of the economics and institutions of trade, her stances seem more like typical campaign rhetoric. For fans of free trade and globalization, Clinton is a much more appealing candidate simply by not being horrible.

Good trade policy always takes a back seat to populist finger-pointing during election season, and there's every indication that Clinton's tone will soften once she becomes president. However, during her primary fight against Bernie Sanders, Clinton took a number of concrete positions that may force her to pursue protectionist policies to the detriment of the U.S. economy.

Clinton's most well-known trade policy promise has been her opposition to the Trans-Pacific Partnership (TPP). The conventional wisdom is that Clinton, who once supported the TPP as Secretary of State, will find a way to support it again after the election. Indeed, Clinton's main line about the TPP is that she won't support trade agreements unless they meet a list of incredibly vague criteria: they must "create American jobs, raise wages, and improve our national security." Since the TPP already accomplishes these goals in its current form, she may be able to support it after saving face with a few minimal changes.

But, Clinton has also condemned some specific aspects of the TPP that will be very difficult to renegotiate. She has lamented the agreement's lack of enforceable rules on currency manipulation and its relatively liberal rules of origin—complaints meant to appeal to the Detroit auto industry.

The TPP's rules of origin were the result of complex trade-offs between the United States and other members. The rules for autos were an especially important part of U.S. negotiations with Japan and will not be easily reformed. Perhaps Clinton can find a way to renegotiate those rules, but doing so will reduce the agreement's effectiveness at integrating regional supply chains—the biggest motivation to negotiate the TPP in the first place.

Clinton's hawkishness on currency manipulation is even more troubling. Crafting rules on currency that don't also condemn the monetary policies of the U.S. Federal Reserve is difficult, and all other members of the TPP are dead set against having any enforceable currency rules. Insisting on strong currency provisions in the TPP is a great way to prevent the agreement from coming into force.

Clinton has also signaled support for unilateral tariffs as a response to foreign currency practices, especially on imports from China. Putting aside the significant difficulty of determining the proper value of China's currency, the impact of manipulation on trade, and how to impose duties without violating global trade rules, Clinton's policy would amount to a sizeable tax on basic goods purchased by American consumers. Nevertheless, the idea of imposing such duties is popular in Congress, and the Obama administration's opposition has been instrumental in preventing their adoption so far. Protectionist wanting to use currency manipulation as an excuse to impose tariffs may find a more cooperative response from a Hillary Clinton administration.

Another way Clinton has promised to impose high tariffs is by vowing to continue the use of nonmarket economy treatment in antidumping cases against China. After December 2016, this practice—which artificially inflates duties on imports from China for purely protectionist reasons—will be illegal under WTO rules. By flatly promising to break the rules, Clinton is compromising America's integrity and authority within the global trading system to help a handful of industries that routinely use the antidumping law to avoid legitimate Chinese competition.

With free trade on the ropes in U.S. political discourse, America and the rest of the world desperately need a president who can lead us all toward a more open economy. Clinton may be less risky than Trump in that regard, but she has so far shown a strong inclination to favor protectionist constituencies.

Trump's staunchly protectionist position gives Clinton a lot of room to pivot toward a more positive vision of free trade and globalization in the general election. Let's hope she drops the negative tone of her past protectionist promises and chooses instead to extol the broad benefits of openness and shared prosperity.

Bill Watson is a trade policy analyst at the Cato Institute's Herbert A. Stiefel Center for Trade Policy Studies.