Bring on the media concern-trolling. 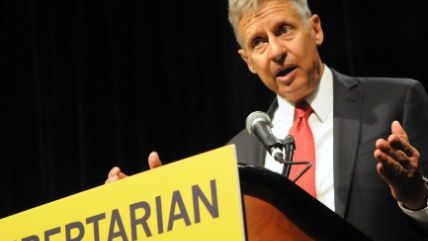 One of these things is not like the others. See if you can figure out which one:

A: A new poll from McClatchy shows Libertarian Party presidential candidate Gov. Gary Johnson getting more votes from the under-30 crowd than Republican Party candidate Donald Trump, a difference of 23 percent to 9 percent. Green Party candidate Jill Stein is also polling ahead of Trump (but behind Johnson) in the same demographic.

B: CNN's ratings saw a big boost when it hosted its second Libertarian town hall last week, getting more than 1.6 million viewers, beating not only the ratings for the previous Libertarian town hall but also the typical ratings for that time slot for CNN. It won the hour in ratings among cable news channels among the 25-54 demographic (though not in total viewership).

That last one is the awfully strange headline and short interview of John Stossell by Callum Borchers at The Washington Post. The interview was posted Sunday afternoon. All of the above information from A-D was readily available.

For reasons that mystify, Borchers has decided that Johnson's moment might have passed because CNN's town hall failed to beat Fox and MSNBC for total viewers, though it won the prime demographic and improved on the last town hall (both details of which are unnoted). Borchers describes Johnson's polling as "flat-lining," though that's not really accurate. A poll from Friday has Johnson all the way up at 12 percent, approaching the threshold to get himself into the presidential debates.

Really, ultimately it seems like Borchers' interview with Stossel is fundamentally about a complaint that the media isn't covering Johnson enough. Borchers uses the massive spike in news coverage that came from the Libertarian Party convention coverage as a baseline for media expectations and wonders why it declined. But one could also easily argue that the massive interest in the convention was a remarkable anomaly that happened because of public discontent in the two parties. A simple Google News search provides page after page of stories about Johnson. The Chicago Tribune just called for Johnson to be allowed into the presidential debates.

Regardless of whether Johnson makes it into the debates, there's little to suggest that his moment has "passed" based on such a thin arguments, but then I must admit my work here puts me constantly in the orbit of press coverage of Johnson. Read the interview here and sound off as to whether you think Johnson is getting a fair shake in the media (and whether that even matters).