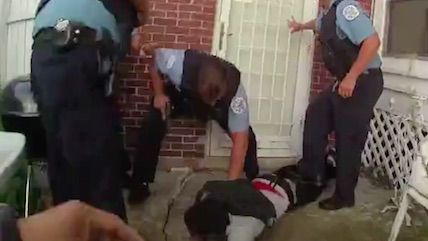 Police officers opened fire on a stolen Jaguar being driven by 18-year-old Paul O'Neal, according to video footage of the altercation released on Friday.

After crashing into a cop car, O'Neal fled on foot and was shot in the back by an officer. O'Neal was barely conscious when the officers handcuffed him, and died of a gunshot wound soon thereafter.

The officers understood the consequences of their actions… sort of.

"I'm going to be on desk duty for 30 goddamn days," said one cop, who had fired several shots at the Jaguar.

Chicago's Independent Police Review Authority is investigating. The agency released video footage of the shooting collected from several officers' body cameras. Videos show O'Neal driving erratically, trying to shake his pursuers. He clips a parked car as he tries to squeeze between it and a police vehicle. One officer then begins shooting wildly at the Jaguar, which collides head on with another cop car a few seconds later. A second officer fires at least one shot at the Jaguar.

Those two officers pursue O'Neal into a suburban backyard. They help a third officer scale a wooden fence and then leave to find another entrance to the backyard. It's this third officer who apparently shot O'Neal in the back. This shooting is not captured on video—the officer's body camera wasn't working, or fell off, according to the authorities. The sound of gunfire can be heard, however.

A number of officers eventually surround O'Neal, who is lying flat on his stomach, bleeding from the gunshot wound in his back. They handcuff him, anyway.

"It is one of the most horrific things I have seen," Michael Oppenheimer, the family's lawyer, said about the videos, according to The Chicago Tribune.

Unarmed teenager #PaulONeal was executed by the Chicago Police.

A couple of important facts:

This shooting is unlike the Philando Castile, Tamir Rice, Eric Garner, or John Crawford cases in that the officers here were dealing with an actually dangerous situation—O'Neal was committing a fairly serious crime, resisting arrest, and endangering lives. But the officers very clearly reacted horribly. Their decision to shoot wildly at an escaping vehicle made a dangerous situation much, much worse.

And while auto theft is a serious crime, it is not one that carries the death penalty. We don't see the officer fire the kill shot, but we know that O'Neal was unarmed, on foot, and running away. And that he was ultimately shot in the back.

There was clearly significant wrongdoing here. Thirty days of desk duty would hardly make up for it.