Trump Is Wrong About NATO

Trump can't let himself acknowledge that our problem is not American weakness but American strength. 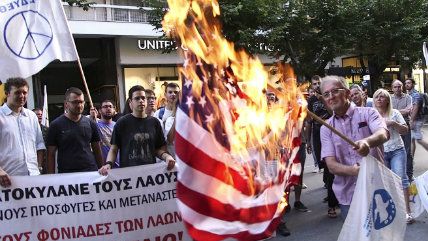 Ed. note: Donald Trump recently told The New York Times that U.S. military support for NATO member states should be conditional on whether those states "are paying their bills" to the bloc.

Again Trump has it backwards. According to NATO's internal logic, the U.S. should pay the members—not the other way around—for providing services to the empire and a tripwire for war. The empire doesn't protect; it provokes and endangers. Who would willingly pay for that?

NATO was a particular problem. By the nineties, it had become integral to America's imperial project, but with the Warsaw Pact gone, and the Cold War over, it was hard to make a case that would appeal to anyone outside the war machine's ambit for needing it at all.

However, the empire's stewards did need NATO because they couldn't or didn't want to police the empire on their own, and because the UN could not be counted on to bend to America's will – not with all those pesky little countries with different ideas in the General Assembly, and not with Russia and China having veto rights in the Security Council.

NATO, on the other hand, was a serviceable international organization that the United States could dominate and also, not incidentally, use to keep European powers under its thumb – in the unlikely event that any of them might decide to get uppity.

On Bacevich's telling, this is what American machinations in the former Yugoslavia were about – once it became clear that the US could not remain aloof from the disintegration of that formerly socialist and multi-cultural country without ceding power to the Germans and other European upstarts.

For [Bill] Clinton – or, rather, for the Clintons and their co-thinkers — dropping bombs on Serbians was a way to make NATO relevant, and also to insure that the United States would continue to call the shots in the so-called Free World.

NATO is America's tool. The member states don't need it. America's ruling elite does. That elite got rather upset in 1966 when French President Charles de Gaulle, resenting U.S. overbearance, withdrew his country from NATO's military structure and asked for the removal of NATO troops from France. (France again became a full military member in 2009.) America has always taken the position voiced by George H.W. Bush as he prepared to send his military to war against Iraq in 1990-91: "What we say goes." That's American exceptionalism.

Trump consistently shows an inability to close the deal—ironic, no? Time and time again he's picked up on a piece of a legitimate issue, seemed uninterested in facts and arguments that would develop the point into a decent campaign issue, then botched it. I think I know why: Trump's shtick is that the U.S. is the aggrieved nation; because of weak and stupid leaders it has been taken been advantage of every which way. That's great fodder for a populist demagogue whipping up ignorant voters. Hence, he certainly can't say anything to suggest that rather than being the victim, the U.S. is the victimizer. When was the last time a demagogue harangued, "Our nation has bullied the world long enough! I intend to put a stop to this outrage!"?

Of course, the U.S. should not really pay NATO's members. Rather, the alliance ought to be disbanded. It was never just a defensive alliance, and the defensive mask fell away entirely when the Warsaw Pact and Soviet Union disbanded. Since that time NATO has been openly aggressive, as it incorporated former Russian allies and Soviet satellites and moved right up to the Soviet border, violating the promise Bush 41 made to Gorbachev in 1990. Moreover, for years the U.S. has talked about bringing former Soviet Republics Ukraine (where the Obama administration facilitated a coup) and Georgia into NATO, as though that would not be seen as provocative by any sober Russian leader.

Trump, as bad as he is in so many ways, might have performed a value service by seriously putting the NATO question before the public. Too bad his demagogy takes precedence over all. He can't let himself acknowledge that America's—and the world's—problem is not American weakness but American strength.