Johnson/Weld Come Out of CNN Town Hall Looking Like "a sensible alternative to the two main options."

The former GOP guvs spend an hour with Anderson Cooper and make themselves stand out by being optimistic realists. 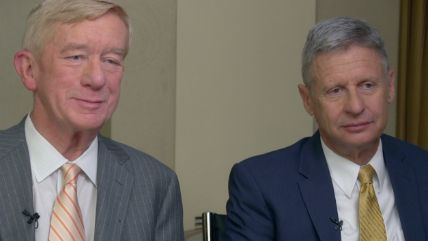 Both Johnson and Weld were calm, optimistic, and straightforward in how they answered questions from moderator Anderson Cooper and various audience members.

It wasn't all soft cheese, of course, as Weld, a two-term Republican governor of Massachussets, said that GOP nominee Donald Trump "has a screw loose." He also dinged Hillary Clinton, of whom he has spoken warmly, for proposing what he said was a tax plan that would raise taxes by $1.1 trillion over a decade.

As he has done in the past, Johnson, a former two-term governor of New Mexico, stumbled when discussing whether or not bakers should be forced by law to cater gay weddings even if they had religious or other objections. All at the same time, he seemed to say that federal anti-discrimination laws covered sexual orientation, that he was against discrimination, and that he didn't want to pass any new laws. Got that? I'm not sure I do.

By the same token, he was clear when it came to the need to cut spending, including defense spending, and the need to balance the budget immediately and go to work on out-of-control debt and regulations. He also talked about how foreign policy and military intervention under both George W. Bush and Barack Obama (and, he pointed out, Hillary Clinton during her time at State) has been a hugely expensive and catastrophic failure. A Johnson administration, he promised, wouldn't be pursuing regime change but it also wouldn't be isolationist, either. He pointed out with evident pride that active military prefer him to either Clinton or Trump. America, he said, "has never been greater, but we have issues" we need to deal with, particularly related to race and policing.

Johnson also quipped that "a wasted vote is a vote for someone you don't believe in" and that America should embrace immigration rather than bemoan it. This, along with his favorable stances toward pot legalization, marriage equality, and abortion rights, are broadly popular among voters. According to Pew Research, fully 59 percent of Americans have positive attitudes toward immigrants, believing that newcomers strengthen the country.

While card-carrying libertarians (do such being exist? probably) were grumbling online over aspects of Johnson's and Weld's answers and positions, their appeal to voters and onlookers who are worn out by the prospects of either Donald Trump or Hillary Clinton seems to be getting at least some traction. Consider this summary by Buzzfeed's Rosie Gray:

I think the Libertarian ticket came out of that town hall looking like a sensible alternative to the two main options.

Reason TV interviewed Johnson and Weld a few weeks ago during FreedomFest, the annual libertarian gathering held each July in Las Vegas. Take a look below and go here for a transcript.