There are more than two choices in the presidential election. 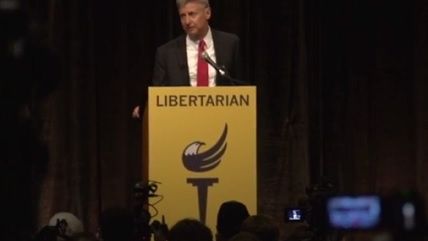 Many people dislike both Donald Trump and Hillary Clinton—for good reason: Both are power-hungry threats to democracy and rule of law.

But what can we do? What's the alternative?

Fortunately, one political party wants government to have a little less power. Former governors Gary Johnson and William Weld, the Libertarian Party's presidential and vice presidential nominee, don't have to be smarter or more moral than Clinton and Trump (though they are) because they want to reduce the power that government has over your life.

"I want government out of your pocketbook and out of your bedroom," says Weld in a recent Johnson/Weld campaign ad.

Sadly, the betting sites give the Johnson/Weld ticket practically no chance of winning.

Why? Most conservatives fear libertarians will weaken our defense and legalize drugs.

But Johnson/Weld don't want to destroy our military; they just want to spend a little less. We already spend more on defense than the next seven countries combined.

Libertarians want to legalize some drugs, but drug prohibition hasn't worked. Kids find it easier to get marijuana than alcohol. And prohibition creates vicious criminal gangs.

The left fears that libertarians will destroy the welfare state and allow rich people to get even richer. We would. But so what if some rich people get richer? Private charity will help the needy far better than clumsy government has. Since people hate politicians, why not elect ones who promise to leave you alone?

Clinton wants to raise taxes and increase regulations. Trump wants to start a trade war and give loyalty tests to Muslim Americans who are already citizens.

Clinton and Trump are so eager to do bad things that they even steal bad ideas from the other party. Hillary Clinton wants to criminalize flag-burning. Donald Trump wants to increase the minimum wage.

Democrats and Republicans each talk as if they want to protect your freedom—from the other party. They don't show much interest in protecting you from their own parties' failed schemes.

Johnson will get a chance to tell Americans more about the libertarian option—if he can make it into the televised presidential debates that start in September. But the private company that runs the debates, the Commission on Presidential Debates, has ruled that to qualify, a candidate must get at least 15 percent support in national polls conducted by five polling firms.

Johnson's reached 13 percent in a CNN poll, but his RealClearPolitics.com average is closer to 8 percent. Audiences might not get to hear the alternative he offers to big government.

I understand that the Libertarian Party probably won't win. So, libertarians aren't waiting for an electoral victory to lead the freest lives they can.

I recently paid a visit to an annual libertarian gathering in New Hampshire called PorcFest. Porc refers not to politicians' wasteful and self-serving pork-barrel spending, but to porcupines, a libertarian mascot. Porcupines leave you alone, unless you attack them—and they have sharp quills for self-defense.

The people at PorcFest don't believe in waiting for good politicians to come along. They know that rarely happens. They try to live their lives as much as possible as if government doesn't exist. Many carry guns for self-defense, enjoy weed without checking local laws and use digital currency instead of government-printed dollars. For the most part, local authorities tolerate it, knowing the PorcFest participants behave well and clean up after themselves.

Maybe the ultimate solution to our political mess isn't to fight forever to make government better. That's probably hopeless. Maybe it's smarter to make a new beginning—just walk away from most of government. The less government there is to abuse us, the less it matters which authoritarian wins the next election.