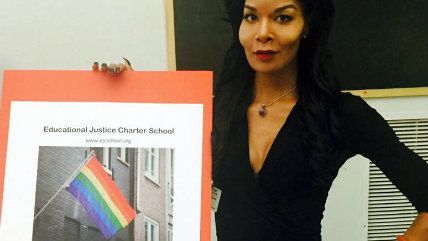 At this year's Democratic National Convention (DNC), Pennsylvania activist Sharron Cooks was one of 28 openly transgender delegates and two trans women-of-color delegates. She's also a former sex worker. Unfortunately but unsurprisingly, it's this last bit that The Philadelphia Inquirer columnist Jenice Armstrong chose to focus on.

"Delegates to political conventions come from all kinds of backgrounds," wrote Armstrong at the beginning of her post. "Still, it's kind of surprising, when you come across someone who admits to having worked in the sex industry." On Thursday, the last day of the DNC, Armstrong took her surprise directly to Cooks, asking the 38-year-old delegate about her past career and insinuating that having a former sex-worker as a Democratic delegate was somehow at odds with the party nominating its first female presidential candidate.

"The thing about that is, people here in America have a stigma around sexuality, sexual orientation, what bathroom you use," Cooks continued.

That wasn't good enough for the Inquirer columnist, however, who kept pressing Cooks for more details about her past work. It's only after the delegate evades her farther that the writer begins to "feel dirty" about her line of questioning.

I asked if she had ever worked under the name "Mistress Soliel" as the paper had been tipped off. (And no, I'm not going to describe what I saw when I Googled it.)

Suddenly, I felt dirty raising the topic with her. It was a downer on what really was a triumphant moment for Cooks to be in such a heady atmosphere just steps away from where President Obama had spoken so eloquently the night before.

Cooks said she wasn't surprised that someone had felt the need to tip off the paper about her experience with sex work.

When you educate and start rising, people are going to try to tear you down. It's sad because here it is an African American trans woman has the opportunity to represent and bring awareness to issues and you have other individuals who are trying to undermine that progress.