On August 1, 1966, armed civilians prevented a mass shooter from claiming even more victims. 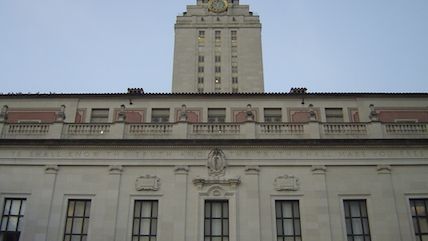 A Texas law that affirms the right of students and faculty to carry guns on public university campuses went into effect today. Much has been made of the significance of the date, given that the University of Texas tower shooting—one of the most infamous school massacres in history—occurred exactly 50 years ago.

Opponents of gun rights say this law—which was approved by Republican Gov. Greg Abbott, over the near-unanimous objections of university officials across the state—is a grim reminder of America's dark obsession with firearms, and one that will make universities less safe. After all, it was exactly 50 years ago to the day when a 25-year-old former marine, Charles Whitman, carted a cache of rifles, shotguns, and pistols to the top of the UT-Austin tower, and opened fire on the innocent people below. He killed 17 and wounded 30 others. (He had murdered his wife and mother before beginning the massacre.)

Student Claire Wilson James was the first person he shot from the tower on August 1, 1966. She survived, though she lost the baby she was carrying, and also her boyfriend, who was shot and killed soon after. James is still alive today, and has no love for guns.

"I just hope they get guns off this campus and get rid of open carry and let the police have the guns if somebody has to have them," she said recently, according to The Guardian.

The amount of pain, terror, and tragedy that James endured is simply astonishing. She's a very brave person, and I don't think anyone could begrudge her her opinions about guns.

But it seems to me that the example of the tower shooting does not present a particularly compelling case against legal guns. On the contrary, it's one of the most obvious cases of good guys with guns stopping bad guys with guns.

Whitman's massacre lasted 96 minutes. But after the first 20 minutes, he was severely constrained in his ability to hit his targets. That's because people started shooting back at him: police and civilians. Gunfire from down below meant that Whitman had to spend more time hiding and less time aiming.

Ultimately, law enforcement officer Ramiro Martinez stormed the tower and killed Whitman. He wasn't alone, though—he was accompanied by an armed civilian. Martinez, in fact, later wrote in his autobiography that civilians played a vital role in bringing an end to the massacre.

"I was and am still upset that more recognition has not been given to the citizens who pulled out their hunting rifles and returned the sniper's fire," he wrote, according to The Washington Times. "The City of Austin and the State of Texas should be forever thankful and grateful to them because of the many lives they saved that day."

Mass shootings at universities are blessedly rare, and I wouldn't argue that concealed carry will actually make campus safer. But letting people carry guns certainly seems like it was a boon to safety, rather than a hindrance, at UT-Austin on August 1, 1966. Prohibiting concealed carry is not much of a deterrence to people like Whitman, who are already intent upon committing murder.