Libertarian ticket gets another prime-time hour, this time hosted by Anderson Cooper 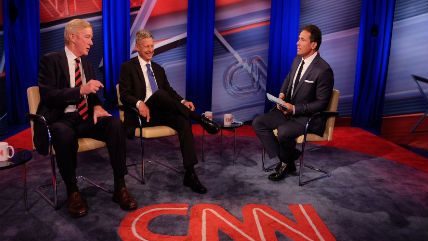 CNN announced this morning that the cable network will hold another town hall discussion on Aug. 3 at 9 p.m. ET with the Libertarian Party White House ticket of former Govs. Gary Johnson and William Weld. "Johnson and Weld will address the current state of the 2016 race and the platform of the Libertarian Party in addition to fielding questions from voters," the press release reads.

More than 900,000 households tuned into the Libertarians' previous CNN town hall on June 23, in a highly anticipated performance that I and many other observers judged as "awkward." Since then, the duo has been making pretty much nonstop media rounds, including at the two major-party conventions. It's a far cry from four years ago, when Johnson was almost never included in national presidential polls, and was reduced to organizing protests begging for media coverage outside of…CNN.