The Republican presidential nominee says he has read the Constitution, but Khizr Khan "has no right" to ask. 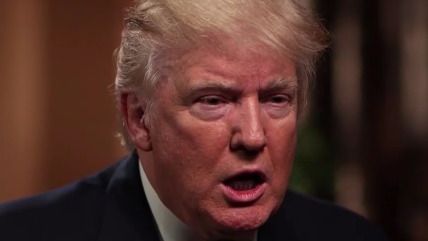 In an interview with ABC's George Stephanopoulos that airs today, Donald Trump takes a swipe at Khizr Khan, the father of Captain Humayun Khan, a Muslim soldier killed in Iraq. Standing next to his wife, Ghazala, at the Democratic National Convention last week, Khan criticized Trump for "smear[ing] the character of Muslims," said the blowhard billionaire had "sacrificed nothing" for his country, and asked, "Have you even read the United States Constitution?" Asked about Khan's comments, Trump takes the high road for about a second, saying, Khan was "very emotional and probably looked like a nice guy to me." But then he adds, "If you look at his wife, she was standing there. She had nothing to say. She probably—maybe she wasn't allowed to have anything to say. You tell me."

Ghazala Khan told MSNBC's Lawrence O'Donnell she did not speak because she was overwhelmed by grief. Yesterday her husband told The New York Times Trump "is devoid of feeling the pain of a mother who has sacrificed her son."

Instead of insinuating that Ghazala Khan had been muzzled by an overbearing Muslim husband, Trump could have taken this opportunity to point out that her son died in a disastrous war that never should have been fought—a war that his Democratic opponent, Hillary Clinton, supported and did not describe as a mistake until more than a decade after it was launched. Since the folly of that war has been a recurring theme of Trump's campaign, a response along those lines would have made sense. Mocking a dead soldier's grieving parents, not so much.

Trump did respond more substantively to Khan's speech. "I think I've made a lot of sacrifices," he told Stephanopoulos. "I've worked very, very hard. I've created thousands and thousands of jobs." Lurking below that statement, obscured by Trump's enormous ego, is the kernel of a valid point: that going to war is not the only way to do good for your country, that entrepreneurs who produce value are at least as important as soldiers who destroy it, especially if they do so in a war that has little or nothing to do with national defense.

But instead of a meditation on the meaning of Captain Khan's sacrifice, we got yet another cheap shot from the thin-skinned bully whom Republicans have chosen as their presidential nominee. In a press release issued yesterday, Trump responds to bipartisan criticism of his comment. He calls the late soldier "a hero to our country" and says "the real problem here are [sic] the radical Islamic terrorists who killed him." He belatedly argues that "Hillary Clinton should be held accountable for her central role in destabilizing the Middle East," noting that she "voted to send the United States to war against Iraq" and that she has "never met a regime change she didn't like." But he also faults Clinton for "lead[ing] the disastrous withdrawal of American troops years later that created the vacuum allowing the rise of ISIS," which makes it seem like he's trying to have it both ways: The U.S. never should have invaded Iraq, and it never should have left (not that it actually did).

Trump also answers Khizr Khan's question. "While I feel deeply for the loss of his son," he says, "Mr. Khan, who has never met me, has no right to stand in front of millions of people and claim I have never read the Constitution (which is false) and say many other inaccurate things." For the record, Khan did not claim Trump has never read the Constitution; he merely asked whether he had, just as Trump merely asked whether Khan had prevented his wife from speaking. It is hard to believe Trump's answer in light of his assertion that Khan "has no right" to say mean things about Donald Trump. If Trump did read the Constitution, he must have skipped the First Amendment.