Check Out All of Reason TV's Video Coverage of the Democratic National Convention! 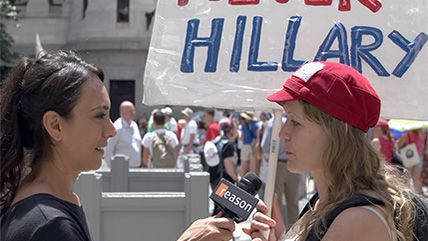 Reason TV covered the 2016 Democratic National Convention in Philadelphia from start to finish. While there, we documented anger with the DNC from Bernie Sanders supporters who felt betrayed by the party in the wake of an internal email leak that showed party officials discussing feeding negative stories about Sanders to the media. We saw Green Party presidential candidate Jill Stein crash the DNC to the delight of disaffected Sanders voters and the dismay of party loyalists. We talked to former governors Gary Johnson and Bill Weld, who are running on the Libertarian Party ticket, about what they view as an unprecendented opportunity to disrupt the two-party system. We gauged the appetite for third party candidates amongst Democratic delegates and even asked them to convince libertarians to vote for Hillary Clinton in November. We asked how they planned to pay for the generous federal programs that various Democratic speakers proposed during the convention, and we explored whether the much-bemoaned authoritarianism of Donald Trump is limited to the GOP.

You can see it all in the playlist below, and in the two Facebook live video interviews beneath that.