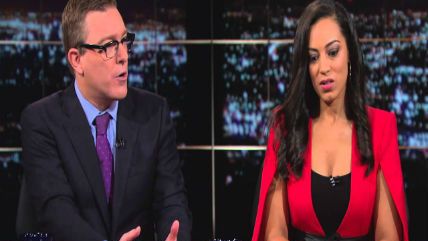 Tonight at 10 p.m. ET I will be talking all things Democratic National Convention on HBO's comedic current-affairs program Real Time with Bill Maher, along with co-panelists Cornel West and Alex Wagner of The Atlantic. The top-of-the-show interview will be with recently unified Hillary Clinton supporter Bernie Sanders, and the mid-show addition will be former Democratic Congressman Barney Frank, so this should be a fun one. (West, for example, was a Bernie delegate on the DNC Platform Committee, then bolted to Jill Stein; Frank, meanwhile, was part of a last-ditch DNC "Unity Reform Commission" to bring Planets Sanders and Clinton together, and has had withering words to say about the Bernie-or-bust crowd.)

Make sure to go to the show's website for Overtime questions as well. Here's the Overtime segment from the last time I was on: