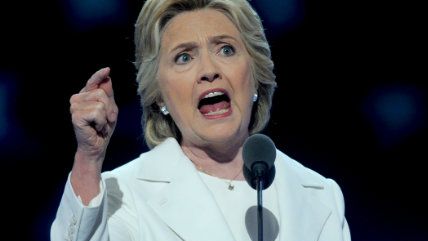 Here's a line that you might hear a few more times between now and Election Day.

"It's just not right that Donald Trump can ignore his debts and students and families can't refinance theirs," Hillary Clinton said during her acceptance speech Thursday night.

The line stood out to me because it bridged the two main goals of Clinton's speech on Thursday—and, more broadly, the two main goals of the entire convention. It took a political shot at Donald Trump for being irresponsible while signaling a willingness on Clinton's part to embrace the more progressive policies favored by the generally younger and more energized part of the Democratic Party that supported Sen. Bernie Sanders in the primaries.

The line came a little more than halfway through the speech, as Clinton took listeners on a brief tour of how the first 100 days of a Hillary Clinton presidency would play out. She specifically name-checked Sanders and promised to work with him "to make college tuition free for the middle class and debt free for all."

The attack on Trump here is something of a non sequitur. Sure, Trump may have overused and even abused America's bankruptcy laws, but there's actually an important reason why student loan debt can't be wiped out in bankruptcy court while the debt of poorly run casinos can.

When a person or business goes through bankruptcy, there are physical assets that can be sold and used to pay lenders. The bankruptcy process is meant to bring both sides to the table to work out a middle ground. Lenders get something back, and borrowers have to pay what they can.

There are no physical assets in student loan debt. A college grad with $100,000 in unpaid loans can't slice off a portion of their knowledge or experience and sell it, any more than they can hand over a portion of the better economic opportunities they have because of a college degree.

And yes, even with crushing debt, college is still a better option for many, but not all, students. Research by the Federal Reserve Bank of New York shows college graduates earn 80 percent more than peers who did not earn an undergrad degree. College graduates, even those with lots of debt, are still less likely to wind up unemployed than those who didn't go to college.

That doesn't mean it's easy or cheap to get a degree, of course.

According to the College Board, the average cumulative student loan debt for the 2012-13 academic year was $25,600 for students at public colleges and $31,200 for those at private institutions.

To anyone who graduated in the last decade, during which tuition costs have skyrocketed, the idea of "free" or "debt free" college tuition probably sounds great.

But attempts by state and federal government to lower the cost of college have contributed mightily to the high cost of attending post-secondary school. Government subsidies have hidden the price of college and broken the market forces that would naturally keep tuition costs down, allowing universities to charge pretty much whatever they want.

Clinton is doing more of the same here, because it turns out that "free" college tuition is actually pretty expensive.

Under a plan she announced earlier this month (as part of a political deal to win Sanders' endorsement), anyone from a family making less than $85,000 a year would get free tuition to public universities. The threshold would increase to $125,000 by 2021.

The project comes with a price tag of at least $35 billion annually.

The income eligibility threshold is meant to target the program at middle and lower-income Americans, but that's a crude instrument for crafting such an expensive policy.

As Reason's Robbie Soave has previously pointed out, "a family living off of $85,000 in New York City, Los Angeles, or Washington, DC might be in much more precarious financial shape than a family living off $85,000 in the suburban Midwest. Does this plan not punish people whose higher incomes are offset by higher living costs?"

Clinton's team knows this. Her vice presidential pick, U.S. Sen. Tim Kaine of Virginia, wrote an op-ed for the Huffington Post earlier this year pointing out this exact problem.

"By making all public university education free, we'd be giving away college education to richer Americans who don't need the assistance paying for it," he wrote. "It is important that a college affordability plan focuses on opening the doors of opportunity for those who need it."

It seems unfair that Trump can use bankruptcy to dodge his mistakes while college grads struggle to make ends meet and pay their loans—but it would be more unfair to make everyone pick up the tab for a college tuition program that adds billions in new government spending, further obfuscates the actual cost of attending college and will do nothing to stop rising tuition costs.