Obama's Right: We Don't "Look to Be Ruled." So Stop Ruling Us Already! 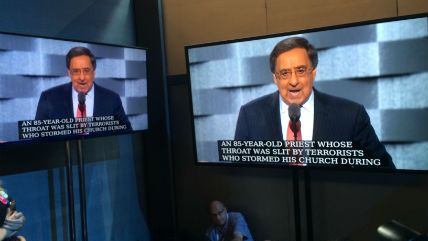 President Barack Obama, in the course of giving a pretty darned effective speech last night at the Democratic National Convention, uncorked one of the better two-liners in his presidency. "Our power doesn't come from some self-declared savior promising that he alone can restore order as long as we do things his way," he said. "We don't look to be ruled."

As T.A. Frank observed over at Vanity Fair, "Many lines by many speakers were delivered, of course, but none quite measured up to that one." It wasn't just the callback to America's founding vibe, it was the almost exasperated amusement with which he delivered it. Trump's strongman authoritarianism, the president was indicating, is self-evidently ridiculous:

Even if the descriptive accuracy was questionable (if a significant number of Americans didn't look to be ruled, why would Donald Trump have won the Republican nomination?), as an aspirational idea Obama's formulation was spot-on. Don't you go treading on me, politician!

If only President Obama and the Democratic Party governed like he talks.

The organizing dissonance of this convention is one that Reason TV's Zach Weissmueller so skillfully documented on Opening Day: Democrats do not understand how extracting taxpayer money to tell taxpayers what they can and can't do with their money and their lives is an act of forcible coercion, too.

Bill Clinton's show-stopper of a speech Tuesday night included an eye-glazing number of government programs his wife has helped push through over the years—increasing the number nurse practitioners in rural Arkansas, requiring elementary schools to have counselors, raising sales taxes to increase teacher pay, expanding pre-school, creating the federal Children's Health Insurance Program, getting emergency money to New York post-9/11, extending family leave…it just kind of goes forever. While it's folly to expect too much introspection at a political convention, what's striking is that almost never do you hear about whether a program is actually working. Cost-benefit analyses are not required. It is enough to say, "There is a victim class or predatory corporate class, and we either gave them money or restricted their latitude." Good intentions are what matter, not performance.

That thinking, and the political opportunism of finding causes that No Decent Person Could Oppose, is why you have things like federal emergency-declarations growing from 28 during Ronald Reagan's presidency to 44 under George H.W. Bush to 90 under Bill Clinton to 130 under George W. Bush and 153 under Obama by just his fifth year in office. That thinking is why the Democrats have just flat-out stopped talking about the country's $19 trillion debt, and have instead embraced expanding, rather than reforming, entitlements.

Spending other's people money—including on massive debt service payments—and restricting their behavior, amounts to "ruling" over them. Judging by this convention, Democrats want to rule over as much as if not more than they ever have.