History is more than a series of milestones. 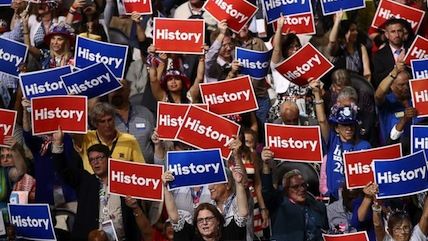 If you watch the Democratic convention, it's almost impossible to avoid the word "history." The organizers even made signs that have nothing but that word printed on it. Usually it refers to Hillary Clinton's status as the first woman to get a major party's presidential nomination, but occasionally the term is trotted out for other reasons too. Last night Brian Williams, reacting to Barack Obama's speech, told MSNBC's viewers that "we've now just had a presidential historian confirm for us that it was history we were seeing."

A few decades ago, the idea of a female president was science fiction. Now it feels inevitable. Not because Hillary Clinton's ascension to the White House is inevitable—it isn't—but because the number of women in the upper echelons of power has been growing; if Clinton doesn't get there first, someone else should soon. Women are now routinely appointed to the Cabinet. More than half of the states have had a woman serve as governor. Women make up about a fifth of each house of Congress. The number of women in office may not come close to matching women's percentage of the population, but it represents a far larger pool of potential presidents than we've ever seen before, and it reflects a larger stream of women into both public and private roles that once were largely reserved for men.

That stream hasn't just made it likely that a woman will become president. It is ultimately far more important than a woman becoming president. Queen Elizabeth I ruled a world power, but the English women of her era were second-class citizens in ways that the vast majority of modern Americans—even, I suspect, a majority of unreconstructed sexists—would think intolerable. What we've seen over the last few decades is something more resilient than a temporary change in who's in charge. It is an ongoing, long-term transformation in what Americans do and think. In what we consider "normal."

At some point in that shift, a woman will occupy the Oval Office, just as women now hold the reins of state in Germany, Britain, and elsewhere. Yet that will be neither the climax nor the conclusion of the story. When the textbooks tell the tale of how American gender roles changed, the first female president's picture will appear. But the story itself, if the text is any good, will be about the evolution that allowed her to take power and that didn't cease once she took it. If you haven't been watching the convention, you needn't fret that you missed a chance to witness history. You've been witnessing it all your life.