"Have You Even Read the United States Constitution?" Father of a Fallen Muslim Soldier Challenges Trump at the DNC

This was the powerful highlight of the Democratic National Convention. 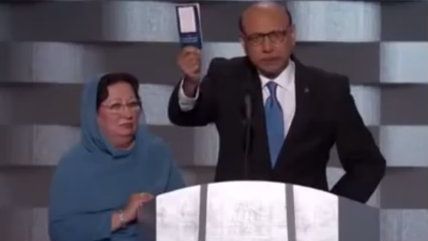 The most powerful speech at tonight's Democratic National Convention tonight came from Khizr Khan, the father of a Muslim soldier killed in Iraq.

Standing by his wife, Khan declared that he was proud to be on stage "as patriotic American Muslims, with undivided loyalty to our country." And he challenged Republican presidential nominee Donald Trump, who has proposed a ban on Muslim immigration, declaring that if Trump had his way, his son would never have "been in America."

"Donald Trump consistently smears the character of Muslims," Khan said. "He disrespects other minorities, women, judges, even his own party leadership. Donald Trump, you're asking Americans to trust you with their future. Let me ask you, 'Have you even read the United States Constitution?'" And then held up a copy of the Constitution.

Watch the whole speech below.