Mark Penn points out you might even get peanut butter avocado at an ice cream parlor. 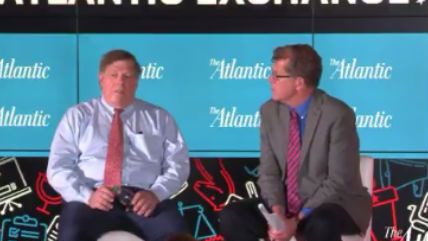 Former Hillary Clinton 2008 campaign strategist Mark Penn pointed out that the only place Americans had just two choices was "red and white wine and politics." Penn noted in an event hosted in Philadelphia by The Atlantic that Americans get more choices at the ice cream parlor, where they might even be able to get a peanut butter avocado concoction.

"For a long time I think people have said there is no independents because people vote Democrat or Republican," Penn said. "That's because there are only two flavors in the ice cream store."

Penn also suggested that while usually about 10 percent of voters like both major presidential candidates, this time that number was "virtually zero." The decisive voters, about 20 percent according to Penn, supported neither.

"Anything can happen when there's just two candidates," Penn said when asked whether Donald Trump had a chance to win.

Trump and HIllary Clinton's favorability ratings are at historically low points, contributing to an environment in which third party candidates like Libertarian nominee Gary Johnson are outperforming in the polls versus where they were four years ago (if they were even included in polls) and final finishes in 2012. Johnson, for example, pulled just short of 1 percent in November 2012 and is now polling at around 10 percent and rising. He needs to get to 15 percent for a chance to participate in the presidential debates.

Related: "Binary Choices" Like Trump or Clinton are So 20th Century, where Nick Gillespie noted: "There are 40-plus types of Pop Tarts out there, 10 flavors (?) of Astroglide personal lubricant, and effectively an infinite number of entertainment channels thanks to the internet."