Design Your Own American Party System!

Play along with Bernie Sanders. 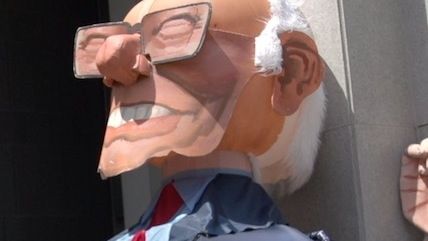 This morning Bernie Sanders urged his followers not to vote for the Green Party's presidential nominee. Speaking at a breakfast event in Philadelphia, the Vermont senator expressed respect for the Greens but argued that this election was a binary choice, The Washington Post reports.

"If we were in Europe right now, in Germany or elsewhere," Sanders said, "the idea of coalition politics of different parties coming together—you've got a left party, you've got a center-left party, coming together against the center-right party—that's not unusual. That happens every day. We don't have that."

What would this election look like if we did have a parliamentary system? It's an interesting thought experiment, because it's easy to imagine this as a five- or six-way race. You could have Bernie Sanders leading the Democratic Socialists and Hillary Clinton the New Democrats—the left and center-left parties that Sanders mentioned. The Libertarians would have Gary Johnson (or perhaps someone like Rand Paul, since he wouldn't have as strong an incentive to present himself as a Republican). Donald Trump would have the old Perot and Buchanan voters, maybe in an America First Party. And the pre-Trump GOP would have a standard-bearer too, a Jeb Bush or a Ted Cruz. Or maybe the Bush Republicans and the Cruz Republicans would be separate operations. The upshot, in any event, is to imagine what it would be like if our political factions were more modular: Instead of struggling for influence and forming alliances within a party, they could compete for votes as parties themselves and then try to form a governing coalition after the election.

My point isn't to make the case for or against such a system. It's to imagine how those factions would align and disalign if they had that kind of flexibility. How well would each of those parties do, and what governing coalition might some of them form? Would the left and center-left align, as Sanders imagined, or would the New Democrats prefer to form a Bloombergian coalition with the Bush Republicans? Would the Bush Republicans outpoll the America Firsters, or would they be also-rans? Who would the Libertarians form a coalition with—or would they just refuse to join up with anyone else? And where do we put Jim Webb? Create your own scenario and post it in the comments.