Those boos you hear are coming from a very pissed off group of Golden State Bernie Sanders supporters, who aren't keen on voting for Clinton. 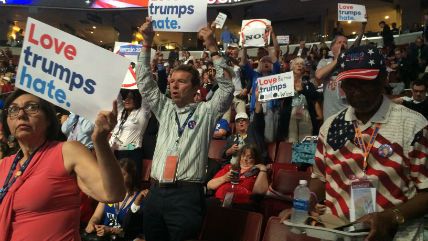 If you are watching the Democratic National Convention at home, you may notice that most any time a new speaker talks about why we should unify behind Hillary Clinton, or merely says her name out loud, there is a minority chorus of boos emanating from the side of the stage. That's about 30 percent of the California delegation, and I just spent an hour sitting next to them, and boy do some of them despise Hillary Clinton.

Anthony Fisher and Robby Soave have reported previously today on the antipathy toward Clinton among Bernie supporters, but watching the wild-eyed hooting among the Golden State faithful was a startling departure even from the anti-Trump dissonance at last week's Republican National Convention. These people are pissed and despondent in a way I've never seen on the floor of a major-party convention.

"I was lucky a couple of weeks ago: I shot a squirrel to bring home for meat," said Brian Seligman, a former Marine on Social Security disability from a car wreck, who recently moved from the Los Angeles area to Victorville. Seligman says his wife can't find a job, and when the food stamps run out at the end of the month he needs to find creative ways to feed his children.

"This isn't just my family," he said, voice welling with emotion, tears beginning to pool in his eyes. "There are 15,300,000 children STARVING in this country, and this woman wears a jacket worth more than I get in a year, while she goes out talking about how she's going to blow up other people's children for another trillion dollars. My kids are dying and she wants to murder other people's kids with my money!"

The Bernie Sanders revolution, which will officially fall short of its goal tomorrow when Clinton is voted the nominee, has Seligman thinking of next steps. "That's happened in history before in France, and their solution was guillotines," he said. "And another great Democrat, John Kennedy, said when peaceful revolution becomes impossible, violent revolution becomes inevitable. And I don't want that, I want people to wake up and vote for someone that cares about people. Bernie comes and he said thank you to ME, personally, he shakes my hand. I've been outside her fundraisers in Beverly Hills, because I didn't have the $55,000 to get in. She didn't want to talk about my homeless brothers and sisters from the military. She didn't want to talk about my starving kids, she didn't want to talk about ending fracking, even though there was a freaking gas leak poisoning us. Yeah, you could say I'm a little upset."

Ben Becker shares Seligman's distaste for the opulent pageantry in Philadelphia. "It's disgusting here," Becker said. "There are people who are really suffering. The point of the Bernie campaign was to create equality, it was to take money out of politics, and to help the people who are struggling in this country, and instead we're just throwing money and partying and playing music with the bands, and these cute little clips making Trump look bad."

Becker plans to keep booing throughout the convention, and will vote for Jill Stein.

Mark Withers is upset at, among other things, Clinton's choice of Tim Kaine as vice presidential candidate—"a slap in the face to all progressives." Why? "If you look at his voting record, look at his history, he's not progressive, he hasn't supported any of those things. We suspect, and I personally agree, that a lot of this is lip service." Should Clinton secure the nomination this week—and like all the California booers I talked to, Withers intends to fight like a wolverine to elect Sanders—then "I'm going to have to make a personal decision."

The Golden State dissidents believe that Clinton and the Democratic National Committee colluded to commit voting fraud in the California primary.

"Our votes were not counted," said Mary Yoon, a soft-spoken (at least when not booing) retired therapist. "When 8 million people vote, and only 7 million votes are counted, we saw shredding trucks in certain counties….Alex Padilla gave the wrong instructions to poll workers."

Asked whether she would vote for Clinton in November, Yoon said "I don't know. I've never voted for a hawk, or a warmonger, which I consider her to be….Her record is very flip-floppy—yes TPP, no TPP, for instance; no gay marriage, yes gay marriage. She is a political animal of the first order, and she goes where the wind blows into more power for her. So will I vote for her? I'm disinclined to it."

So what about the Green and Libertarian parties? "I think both their candidates…are actually more palatable to elect than [those of] the GOP and the DNC," Yoon said. Then when she found out who I worked for, she said "Libertarian! I've think your candidates…both your presidential and vice president, make far more sense to me. Not necessarily agreeing with the platforms, but as men who seem to have some ethics."