Putin Isn't Responsible for How the Democrats Treated Sanders' Campaign

Attempt at deflection sends a message that voter frustration is irrelevant. 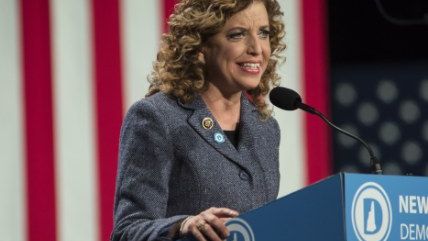 It's all too typical that Debbie Wasserman Schultz's reign as Democratic National Committee chair came not from the crime but the cover-up. Emails obtained by WikiLeaks from a hacker revealed that the DNC appeared to be coordinating to make the Bernie Sanders campaign look bad, inappropriate behavior from what is supposed to be a neutral organization.

Wasserman Schultz will be stepping down as chair by the end of the week (she was booed at a delegate meeting this morning) and formally joining Clinton's campaign.

The leak has exposed more of the rift between the Democratic establishment and the populist democratic socialist base that makes up Sanders' support. It highlights that the Democratic Party is not as united as it would like to portray itself as (particularly as when it compares itself to the extremely fractured GOP).

The leak has also possibly (and to be clear, this is not conclusive) suggested that hackers serving the Russian government or President Vladimir Putin are attempting to influence the election. Cybersecurity experts are saying the hack likely originated from Russia or at least has the fingerprints of Russian hackers. There's hardly a smoking gun as yet. The FBI has launched a probe to try to determine what happened to the committee's cybersecurity and who is responsible.

But that the investigation is just now starting hasn't stopped the Democrats and Clinton campaign to attempt to deflect away from the contents of the leak to try to implicate Donald Trump as Putin's stooge. The Clinton campaign very quickly put out a statement calling the leak "evidence the Russian government is trying to influence the outcome of the election," attempting to plant the seeds that a vote for Trump is supporting the kind of kleptocratic corruption that rules Russia. And while there's a compelling case to be made that a Trump presidency would trend toward that direction, this response is a generalized dismissal of what the email contents actually say about the Democratic Party's direction and how it feels about those who are trying to influence the party's stances.

Putin may or may not have played some role in the hacking of the DNC, and certainly it's proper that the government investigate and track down who is responsible. But neither Putin nor Russian hackers are responsible for the way the party treated Sanders and its supporters. And this attempt to quickly deflect the subject matter over to Trump and Putin has the side effect (intentional or not) of again dismissively treating Sanders and his supporters' concerns as largely irrelevant to the establishment.

There is a rift in the Democrats that is reminiscent of the rise of the Tea Party back when Barack Obama was elected, and it's not clear right now that the Democrats have learned much from the Republicans (it's also not clear that the Republicans learned either or else we might not have had Trump). There's an interesting paradox with Clinton here. Clinton is certainly the least-liked candidate the Democrats have put forward in modern times. But what has made her unlikeable in part is her naked political ambition and savviness in being difficult to nail down on actual positions. This means that once she realized the Sanders' supporters weren't going anywhere, she has carefully, diplomatically incorporated many of Sanders' most-vocal positions into her campaign (if they weren't already there). She's signed on to an absurdly high increase in the minimum wage, to a limited free college campaign (after previously focusing on trying to reduce college debt), and has reversed herself on trade deals.

Really, Clinton has done a lot to try to avoid a party crack-up and bring Sanders' supporters to her side (though this has made her an even worse candidate to libertarians). That the response to this email dump is to try to direct its talking points toward Russia and Trump serves only to again dismiss the part of the party's voting base that is unhappy with the direction the party has taken. There are rumors that there will be more leaks of more emails. Pointing fingers at Russia won't do much to stop unhappy voters who feel like the party is serving itself more than it serves them.

And that leaves an opening for third-party candidates. Check out what ReasonTV has discovered when interviewing Sanders' supporters at the Democratic National Convention: