Prepare for another round of 'The system is rigged.' 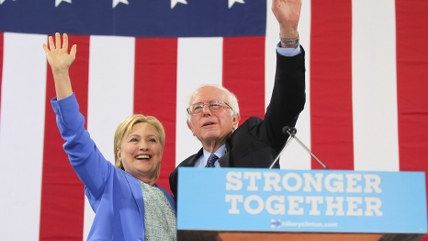 Last night in Donald Trump's nomination acceptance speech, the candidate made clear plays toward Bernie Sanders voters, referencing him by name and repeating Sanders refrain that "the system is rigged" on behalf of the rich and powerful.

Sanders' Twitter feed at the time was not having it, blasting out criticism of Trump's speech. But today the Twitter feed is silent about an email dump from Wikileaks that has grown more and more attention throughout the day. A hacker got his hands on nearly 20,000 emails from the Democratic National Committee (DNC) that show that the allegedly neutral leadership of the party was at least frustrated with Sanders and was possibly trying to undermine his campaign.

The nastiest piece of internal email suggests that somebody at the DNC wanted to figure out whether they could use Sanders' religion, or rather the possible lack of it, to attack him in Southern states. From Mediaite:

In an email dated May 5, DNC CFO Brad Marshall apparently floats the idea of trying to raise Sanders' potential atheism. The email does not mention Sanders by name. The email says, "It might may no difference, but for KY and WVA can we get someone to ask his belief. Does he believe in a God. He had skated on saying he has a Jewish heritage. I think I read he is an atheist. This could make several points difference with my peeps. My Southern Baptist peeps would draw a big difference between a Jew and an atheist."

In a subsequent email on the same thread, Marshall wrote simply, "It's these [sic] Jesus thing."

The Intercept contacted Marshall, who said he didn't recall the email, but said it wouldn't have been about Sanders but rather a "surrogate." Not sure that actually makes it better.

It will be interesting to see how the Sanders supporters who show up at the Democratic National Convention next week react to this news. Perhaps they'll add some more cabbage and asparagus to their diet.

Read more about the contents of the emails here at The Washington Post.