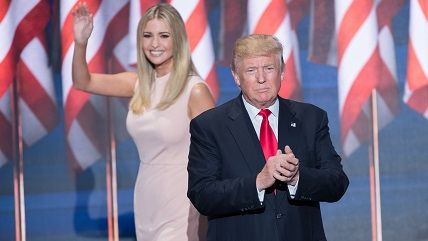 Donald Trump suggested in his nomination acceptance speech last night "to focus on three things" to protect Americans from terrorism—the "best intelligence-gathering operation in the world," "stamping out Islamic terrorism" instead of nation-building and regime change, and suspending immigration "from any nation that has been compromised by terrorism."

Trump did not offer any more details about how he envisions boosting intelligence-gathering operations, although based on the platform it involves at the very least more data collection efforts.

Trump rejected nation-building and regime change efforts "that Hillary Clinton pushed in Iraq, Libya, Egypt, and Syria," saying those policies had to be abandoned. "Instead, we must work with all of our allies who share our goal of destroying ISIS and stamping out Islamic terrorism and doing it now, doing it quickly," Trump said. "We're going to win. We're going to win fast."

Trump did not elaborate on his plan, or on how it would differ from the current efforts by the U.S.-led coalition to destroy ISIS, only to say that would include "working with our greatest ally in the region, the State of Israel." German journalist Jürgen Todenhöfer reported that ISIS fighters told him that Israel was the only country they feared. "They told me they know the Israeli army is too strong for them," Todenhöfer told the Independent earlier this year. Israel is not technically in the anti-ISIS coalition, but one Israeli general characterized their support, largely intelligence-sharing, as "essentially" being a part of the coalition. ISIS has threatened Israel and claimed Israel has hit targets in the Sinai. Israel has avoided involvement in Syria, where every warring faction is anti-Israel.

Finally, Trump insisted that suspending immigration "from any nation that has been compromised by terrorism" until "proven vetting mechanisms" were put in the place was very important. It is unclear how he would define nations compromised by terrorism. At the very least it would include Syria, refugees from which he singled out. "We don't want them in our country," he told a cheering Republican crowd, but did not specify whether countries like Iraq or even France would be on the list.

Trump claimed there were "massive refugee flows coming into our country under President Obama." Just under 70,000 refugees from more than 70 countries were accepted into the U.S. in fiscal year 2015. There were just over 60,000 refugees accepted into the U.S in fiscal year 2008, the last year completely under President Bush. At the same time, the ceiling for refugee acceptances was 80,000 in 2008 and 70,000 in 2015. The refugee flow dipped in 2011 and 2012, to under 60,000, while the ceiling went from 80,000 to 70,000, and then returned to just under that ceiling—these are refugees from around the world and not only terrorist hotspots. In 2015, about 25,000 came from Afghanistan, Iraq, Somalia, and Syria. By contrast, about a million people are admitted into the country as legal immigrants every year.

Separately, while Trump did not touch on the issue of NATO obligations except to take credit for its plan to establish a new intelligence chief post, his top policy advisor, Sam Clovis, insisted Trump's comments this week to The New York Times were not a mistake. Asked whether he would come to the dense of NATO members attacked by Russia, Trump said he would evaluate whether they were meeting their obligations first. "Make sure we're not the only ones with a gun, that's all we're saying," Clovis told a group of European diplomats, according to the Washington Post. "If you are going to come to the gun fight, make sure you're packing."