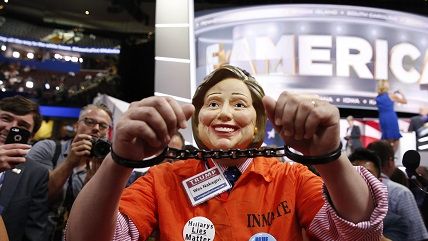 A new idea is taking hold in response to criticisms of Hillary Clinton based her tenure as Secretary of State—that the decisions were Obama's and not hers. Trump said in his acceptance speech Hillary Clinton had been put "in charge" of U.S. foreign policy when she was appointed Secretary of State. "Trump wrong again," the Washington Post's Josh Rogin tweeted. "Hillary Clinton was never 'in charge' of U.S. foreign policy. If so, she would have done a lot of things different."

Former Michigan Governor Jennifer Granholm, meanwhile, insisted on CNN this morning that a cabinet member wouldn't go against the president, or they wouldn't be a cabinet member much longer, thus answering why Clinton was not in any way responsible for any global instability today.

That's not quite how it works. Cabinet members are supposed to advise the president, not simply agree with them. And Barack Obama, as he was forming his first cabinet, was reported to have been inspired by Doris Goodwin's Team of Rivals, an account of the presidency of Abraham Lincoln, who chose William Seward, the 1860 Republican presidential frontrunner he defeated for the nomination, as his Secretary of State.

"All of our latest discussions about Lincoln centered around diversity of thought and vigorous debate on issues and being able to surround yourself with people you disagree with without being disagreeable, because you feel that it's going to lead to a better answer, the best answer," said Marty Nesbitt, one of Obama's closest friends and basketball companions in Chicago.

While Hillary Clinton has so far insisted she has had no regrets about the 2011 Libya intervention, of which she was a primary advocate, even as President Obama has acknowledged failing to plan for the aftermath of the Libyan intervention the "worst mistake" of his presidency. In Afghanistan, Clinton pushed a "diplomatic surge" that ended up being a giant exercise in bureaucratic infighting. Clinton rejected intervention in Syria at the tail end of her tenure, saying the situation was not as grave as it had been in Libya. Four years later, her likely defense secretary pick is advocating for stepping up intervention in Syria, against ISIS and Bashar Assad, beyond what President Obama has committed. Had Clinton been completely in charge of U.S. foreign policy under Obama, and stuck around for four more years, things could have been even worse.