In a Party Filled With Cowards, Cruz Stood Apart

Republican delegates booed when he told them to vote their conscience. 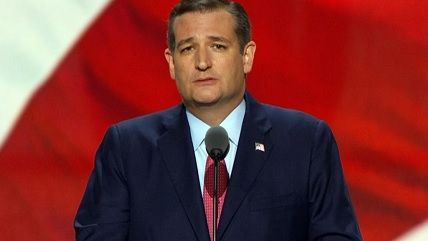 Say what you will about Ted Cruz's politics or personality, but it takes a special kind of chutzpah to stand up at a convention—in front of millions of viewers—and unfurl a comprehensive attack on the party's nominee. It's also unprecedented. On Wednesday night, Cruz gave a commanding and inclusive speech about conservative values. It was so good that the crowd forgot to boo until he was more than halfway finished.

"Stand and speak, and vote your conscience. Vote for candidates up and down the ticket who you trust to defend our freedom… (so that) we will be able to say, 'Freedom matters, and I was part of something beautiful.'"

All these words were broadsides against Donald Trump's candidacy. By the end, the crowd tried to drown him out with boos and pro-Trump chants. Cruz's wife had to be escorted out of the convention center because a mob of Trump fans was threatening her. A man in a donor suite had to be restrained when Cruz walked by. They didn't want something beautiful at the Republican National Convention; they wanted something angry.

When Trump first ran for president, he claimed that the Republican Party was nothing but a bunch of spineless weasels who didn't have the mettle to fight. Trump then won the nomination, and most of the Republican establishment proved his contention true by backing a candidate whose worldview directly conflicted with their own stated beliefs.

There were those, such as Paul Ryan and Mitch McConnell, who reluctantly offered unconvincing endorsements to avert a civil war. Let's just say this is the sort of risk aversion that falls well within the normal parameters of politically expedient behavior—the kind we all supposedly hate.

Then there were those who had no shame. Example: Then-candidate Rick Perry once gave a speech titled "Defending Conservatism Against the Cancer of Trump-ism." Cancer. Now, if you want to read the text of his speech, you won't be able to find it on Perry's website. It's been removed. And the man who once said Trump-ism is "a toxic mix of demagoguery and mean-spiritedness and nonsense that will lead the Republican Party to perdition if pursued" was soon angling for the veep spot and promised that he would help Trump in "myriad ways."

Marco Rubio, Bobby Jindal, Paul Ryan and Scott Walker were the people who would supposedly synthesize conservative ideals and then offer a compelling, modern, principled, political case. All of them were, at various times, harshly critical of Trump. But all of them eventually fell in line. Trump fans are never going to warm to these "elitists," no matter how helpful they are this year. And after Cruz's speech, all of them look weak.

Cruz, who we shouldn't forget tried to be buddies with Trump for most of last year, ended up in a different place. Now, I should note that if someone smeared my wife and accused my father of being complicit in the murder of a president, I wouldn't merely refuse to endorse that person; I would have a new favorite enemy. I'm sensitive like that. So I can imagine Cruz's speech had something to do with this history. He's human, after all.

It also says something about Trump's judgment that he invited a politician whom he'd cruelly attacked to speak at the convention—in a prime-time spot. "This man is a pathological liar," Cruz spat out not that long ago. "He doesn't know the difference between truth and lies. He lies practically every word that comes out of his mouth… The man is utterly amoral." Even if you believe that the Trump camp set Cruz up to be booed (a story I'm highly skeptical about), he created a needlessly divisive situation that could have easily backfired.

It couldn't have only been vengeance. Cruz hasn't really wavered on his political positions—whether you like them or not. What shouldn't be lost in the kerfuffle is that the speech he gave was a well-delivered distillation of conservative ideas that went well beyond the strikes on Trump. In contrast with what's been going on, it sounded inclusive.

Cruz also made a strong case for religious liberty—for Christians, Jews, Muslims and atheists—and for federalism. All that talk about the Constitution offended Trump's fans because they know well that the candidate has little, if any, interest in preserving the document. The phrase "vote your conscience" provoked boos from the GOP nominee's fans.

The same day Cruz angered Trump supporters by not honoring a silly political pledge to endorse the GOP nominee, Trump was quoted in a New York Times interview praising another authoritarian and asserting that he would ignore international treaties signed by the United States.

So though it takes guts to pull off what Cruz did, there wasn't much downside politically. It seems unlikely that a Trump victory would mean an end to Cruz's Senate career. If 2016 ends up being a disaster for his party—and it's a good bet it will—Cruz will be the only major Republican to emerge from the Trump fiasco with his principles largely intact. Maybe, as his critics claim, he's just laying the groundwork for 2020. Maybe it will backfire. Maybe only someone as stubborn and egotistical as Cruz could do it. So what?