Come See the Softer Side of Snakes

Anthropomorphic feminism in the reptile kingdom 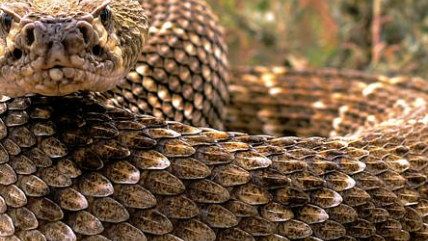 Imagine the meeting at the Smithsonian Channel a few months back where all the programming bosses are sitting around, wondering what to air at the end of July when television would be dominated by back-to-back political conventions. And somebody jumps to his feet and shouts, "I've got it! How about a show on real snakes?"

And thus was born Viper Queens, a peculiar little exercise in anthropomorphism that heroically, hilariously, and hopelessly tries to turn deadly reptiles into sympathetic characters. Oh no, the aging king snake is stalking the baby rattler! The single mom bares her fangs! First one to shout Hillary and Bernie and Chelsea has to do tequila shots!

The heroines of the relentlessly and fairly nuttily feminist Viper Queens are Velvet, Therma, and Aries—an African Gaboon viper, a rattlesnake, and a puff adder, respectively. Though scattered around the world (vipers can be found most anywhere that isn't an island), they all share long, hinged fangs, deadly venom, and—according to Viper Queens—a propensity to be profoundly misunderstood by humans, who unenlightenedly tend to see being bitten and injected with flesh-eating cytotoxins in a negative context.

Though the documentary tactfully avoids the subject, I'm pretty sure that much of the animal world shares human bigotry towards vipers, given the truly appalling footage of Therma and the girls ingesting entire rodents and birds at a single gulp.

The footage of a mouse, its tiny paws raised in supplication, disappearing down an adder's gullet, looks like it came right out of a recruiting video for a reptilian version of ISIS. Bigger animals don't fare much better: Viper Queens includes a photo of a rhino limping along on a foot rotted away up to the ankle, the result of a careless misstep too close to an adder.

Not that all vipers are equally belligerent. Therma, like the rest of her species, prefers warning off the unwary with her rattles to a lot of promiscuous biting. And even when she bites, her venom attacks only blood cells, which is bad news for rabbits and such, but not so much for the larger circulatory systems of humans. (Feel free to not try out this theory at home.)

Velvet and other African Gaboons mostly lie around in the deep jungle for months at a time, well off the human path, before striking the occasional animal passerby with terrifying suddenness.

But even Viper Queens admits that Aries is a bit of a bitch. Puff adders like to hang out in urban areas, where they can feast on mice and other human camp followers, and that leads to some unfortunate interactions. Adder venom has an omnivorous lust for cells of all kinds, and the bitten limbs of human survivors of their attacks are bloated and flayed as if they've exploded.

Viper Queens being the chick-flick that it is, you're to learn a lot more about reptilian gynecology than you ever dreamed. Among the more aberrantly interesting sections of the documentary is a sequence about a contest to see which male rattler gets to court that cute little Therma.

The fellows engage in a long, sinuous wrestling match, with homoerotic implications that even Rainer Werner Fassbinder would envy, that ends in an oddly tender way: "The loser gets pinned to the dirt, not death," as Viper Queen's narrator observes.