Ted Cruz Defines Freedom As Its Opposite 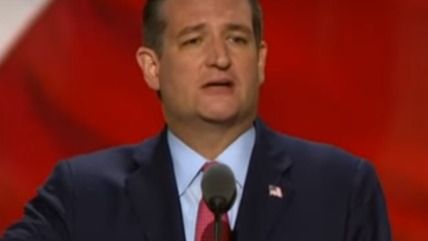 Ted Cruz was booed at the Republican National Convention last night for failing to endorse his party's nominee. He should have been booed for philosophical incoherence.

"America is more than just a land mass between two oceans," the Texas senator declared. "America is an idea, a simple yet powerful idea: freedom matters….Our nation is exceptional because it was built on the five most powerful words in the English language: I want to be free."

What does freedom mean to Ted Cruz? It means "religious freedom, whether you are Christian or Jew, Muslim or atheist." It means "the right to keep and bear arms, and protect your family." It means "your freedom to choose your own doctor, without Obamacare." It means "free speech, not politically correct safe spaces."

So far, so good, assuming Cruz is defending freedom of contract in the context of health care and attacking government-enforced "safe spaces" (on the campuses of public universities, for instance). But according to Cruz, freedom also means "your freedom to choose your child's education, even if you aren't as rich as Hillary Clinton or Barack Obama," which implies a right to subsidies forcibly extracted from your fellow citizens. While I agree that letting tax dollars follow students to the schools their parents choose is better than forcing their kids to attend government-run schools, that policy is not as straightforward an example of "freedom" as Cruz implies. The putative right to government-subsidized tuition, which asserts a claim on other people's resources, is qualitatively different from the right to practice one's religion or speak one's mind, which requires only that other people refrain from interfering.

Cruz's conflation of negative and positive freedom is only the beginning of his confusion. He cites his father's experience as a Cuban refugee to illustrate his concept of freedom yet claims freedom also means building a wall to keep other immigrants out, restricting trade for the sake of special interests, and banning marriage between people of the same sex. Cruz doesn't bother to explain why prohibiting peaceful, consensual, mutually beneficial exchanges, whether they involve goods or labor, should be counted as a victory for freedom. But he does take a stab at framing gay marriage bans in terms of freedom. "Freedom means recognizing that our Constitution allows states to choose policies that reflect local values," he says.

While there is a constitutional case to be made for leaving the definition of marriage to the states, federalism is by no means synonymous with freedom. Federalism can facilitate freedom, as illustrated by the ongoing collapse of marijuana prohibition. But federalism also can facilitate local tyranny, as illustrated by the criminalization of consensual adult sexual activities. Even if you do not think the 14th Amendment requires states to treat gay and straight couples equally under the law, you might still think states should do so in the interest of basic fairness, whether that means expanding the definition of marriage or getting out of the marriage-certifying business altogether. In any event, Cruz's take on this issue is puzzling. For him, the ability to marry the person you love is not freedom, but the ability to stop that marriage is.

Although Cruz could not bring himself to endorse the man he condemned as "utterly amoral," a "narcissist," and a "pathological liar" just two and a half months ago, there is considerable overlap between his vision and Donald Trump's. Cruz, always keen to restrict immigration and condemn political correctness, even seems to be moving toward Trump-style protectionism on trade. But Trump should not be blamed for Cruz's incoherence, which is endemic to modern American conservatism. Conservatives oppose "big government," love liberty, and support free markets—except when they don't. Those exceptions can be rationalized in terms of social order, patriotism, national security, traditional morality, or paternalistic beneficence—values that supposedly trump liberty in particular cases. But because Cruz refuses to acknowledge the various ways in which conservatism tramples on liberty, he ends up defining freedom as its opposite.