"I don't know that it's the government's part to regulate sins and all of that." 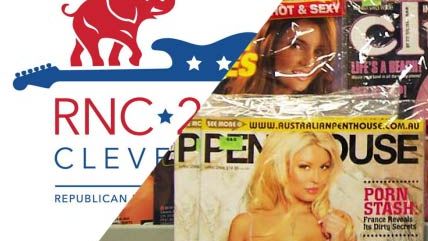 Tucked into a section on criminal justice reform, the Republican Party's 2016 platform suddenly takes a turn for the weird: Pornography, it states, "has become a public health crisis that is destroying the lives of millions. We encourage states to continue to fight this public menace." But while GOP officials might want to control American's viewing habits and fantasies, rank-and-file Republicans don't seem so sure Uncle Sam looks good as an anti-porn crusader.

Interviewing delegates and other attendees inside the Republican National Convention on Wednesday, we discovered many—including quite a few who claim to abhor pornography—want the party to stop focusing so much on social and sexual issues and fear that attempts to outlaw or censor online-porn betray the party's alleged commitment to limited government.

"We're a free country," says delegate Eric Lakin, of Los Angeles, California. "You wanna look at pornography? Go for it, as long as it's not child pornography. I have a real problem with the Republican Party trying to get into our bedroom. Don't tell me who to sleep with, don't tell me who to marry. If I wanna marry my horse, that should be legal. It should be about immigration, national defense, maintaining our roads, low taxes, and big business. I think the Republican Party needs to get a grip."

Billy Carroll, a delegate from Delaware, doesn't mind its inclusion in the platform. But he doesn't think there's much government can do about pornography, on a practical level. "I don't know that there's much that you can do to stop it. It's on the Internet, it's available."

"It's our role to go out as Christians to tell people why they shouldn't participate in pornography," he continues, "but if someone wants to build a business somewhere, it's not [the government's] place to tell them know you can't build that business there. And I don't think government should be telling people, you can't do this in your home."

Some delegates worry that the Republican Party's focus on these sorts of issues is holding it back. "You have these entrenched interests, what I call the Old Establishment," says Lakin, naming George W. Bush and Ohio Gov. John Kasich as examples. "These folks, they represent the old party. And this is a revolution—we are taking back the Republican Party. It's either make it or break it time, because it's gonna blow up or it's gonna charge forward with this great new candidate, Donald Trump, warts and all. He is breaking the old establishment party and we are charging forward and redefining what [the party is] going to be."