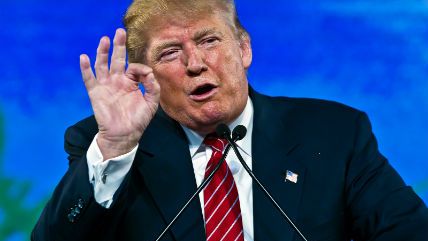 Republican presidential nominee Donald Trump is giving a speech tonight, and Politico has obtained an advance copy. It's a familiar stew of Great Man Theory, protectionism writ large, and supporting our troops/cops, but on a night when millions of Americans may be focusing on Trump for the first time, here are seven* lines that drip with alarming levels of authoritarianism:

1) "I am not going to let companies move to other countries, firing their employees along the way, without consequences."

Note: Freedom of movement, and freedom of businesses to fail, has long been intrinsic to the American experiment.

2) "Nobody knows the system better than me, which is why I alone can fix it."

Note: This isn't even Great Man Theory, it's GREATEST Man Theory. Such delusion is the rhetorical currency of dictators, not democrats.

3) "[T]he crime and violence that today afflicts our nation will soon come to an end. Beginning on January 20th 2017, safety will be restored."

Crime is overwhelmingly a state and local issue fought by state and local cops and prosecutors. Thinking a president or his government can "end" crime is a fantasy, and modern history is filled with the human wreckage of the federal government acting upon the freedom-restricting impulse, from Richard Nixon to Bill Clinton, to get "tough on crime."

4) "[W]e must immediately suspend immigration from any nation that has been compromised by terrorism until such time as proven vetting mechanisms have been put in place."

So, France? Trump is talking about a massive, unprecedented disruption in the flow of human beings in and out of this country, which would have a hugely negative impact on tourism and commerce. And any country we impose these bans will likely turn around and slap them back on Americans.

5) "We are going to build a great border wall to stop illegal immigration, to stop the gangs and the violence, and to stop the drugs from pouring into our communities."

Quick question about the efficacy of building a wall to keep out drugs: Why doesn't work for prisons?

6) "[Bernie Sanders'] supporters will join our movement, because we will fix his biggest issue: trade."

Trade is not a lawnmower; you cannot "fix" the voluntary international exchange of goods, and those who act upon that delusion inevitably make trade less free and goods more expensive.

7) "We are going to enforce all trade violations, including through the use of taxes and tariffs, against any country that cheats. This includes stopping China's outrageous theft of intellectual property, along with their illegal product dumping, and their devastating currency manipulation."

With Trump, the authoritarianism is not just in the policies, but in the basic habit of mind, and populistic selling proposition. But hey, at least he said "we will fix TSA at the airports!"