Not what I expected when I showed up at FreedomFest, the "world's largest gathering of libertarians." But it's all good. 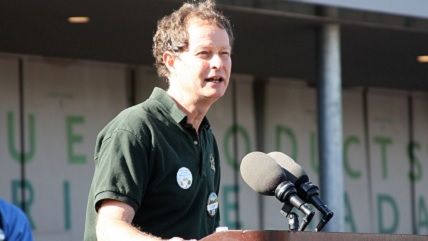 Yes, the Republican National Convention is taking place in Cleveland and Reason staffers are out in force. In many ways, tonight was the start of the Big Things, with vice-presidential candidate Mike Pence giving a Big Speech about Indiana basketball or something (read why he stinks from a libertarian perspective) and Ted Cruz throwing down on Donald Trump. Thursday, of course, Trump himself takes the stage and all the world will shudder with love and hate.

But screw electoral politics for the moment. There are always better things to talk about.

Last week was FreedomFest, the annual event held in Las Vegas, where about 2,000 libertarians gather to talk, speechify, and hang out. Reason folks such as Matt Welch and myself give forth and it's always a very good time. Next year will be FreedomFest's 10th anniversary and William Shatner—TV's own T.J. Hooker—will be appearing (go here for early cheap registration).

Reason TV always interviews a bunch of people and the finished products will be rolling out in a couple of weeks, as the convention madness fades like a bad dream. Among the many folks we spoke with (including Judge Andrew Napolitano, Steve Forbes, Bill Weld, and Gary Johnson) we talked to at least two vegans: John Mackey of Whole Foods and Penn Jillette of Ringling Bros. and Barnum & Bailey Clown College.

They have come to a plant-based diet from very different paths and neither believes veganism is a "must-thing" for libertarians.

At the same time, Mackey has spoken often and eloquently about not just the moral case for capitalism but also for veganism. You can take or leave the philsophy behind veganism, but one thing you've got to admit is that Mackey, who will turn 63 in August, is incredibly spry and youthful. He doesn't just eat well but, having had the pleasue of his company at dinner on several occasions, he eats really tasty food. This is very reductionistic of his very sophisticated argument in Conscious Capitalism, but Mackey argues that as capitalism moves out of its mass-industrial phase and creates a post-scarcity world, people do and should start thinking about other, higher values. Essentially, as we have more time and wealth, we start moving up Maslow's hierarchy. The same is true for eating and the way we treat animals, he says.

Among the many topics that Mackey discussed with Reason was a great new documentary he helped produce. At The Fork is directed by John Papola (who collaborated with Russ Roberts on the Keynes-Hayek rap videos) and follows John's journey from being a meat eater toward the vegetarianism his wife and collaborator Lisa Versaci practices. At The Fork looks at different ways that food animals are treated by different types of producers (factory farm to free range to everything in between). It is scrupulously fair to all of the voices in it and openly talks about how customer demand is a huge factor in how things get done. Regardless of how it affects what you eat, you will learn a lot from it.

Then there is Penn Jillette, who dropped 100 pounds in like 15 minutes via a crazy diet process he details hilariously and movingly in his forthcoming book, Presto!: How I Made More than 100 Pounds Magically Disappear and Other Big Fat Tales. Penn's interest in eating plants only is health-related and he doesn't subscribe to many (or maybe even any) of the ideological concerns surrounding a vegan diet. To be honest, I'm only about 100 pages in, but ever since dining with Mackey and talking with Penn last week, I've also been staying off the animal stuff.

From the intro to Presto!:

I didn't lose the weight in order to write a book. I didn't train myself to eat healthy in order to share my techniques with the world. I didn't do it beacause the trips to the hospital scared me skinny, I did because I wanted to give myself a few more chances to die from the Bullet Catch [a great and dangerous trick that Penn & Teller have been doing for 20-years plus].

The argument Penn makes early on is that he wants to do a hard diet that finally stops him from being the "fat fuck" he has always been. What is truly inspirational is that he talks about his life-long interest in changing himself. When our interview goes live, you'll also hear him talk about why Bob Dylan and Lou Reed are his heroes and why even though he hates everything Hillary Clinton stands for, he'll take her over Donald Trump (even though he'll vote for Gary Johnson).

I recommend you read Penn's book, check out At The Fork, and take Mackey's position seriously. Whether it's through a philosophical stratagem or you just want to feel fitter and better, it's a goddamn fascinating thing to try to pull yourself out of your day-in/day-out diet. John Mackey advances an ethical and pragmatic argument for getting rid of foods with faces and Penn Jillette offers up a very different standard. But they are both goddamned smart and serious folks. As someone who totally believes we are all Sanpaku, I'm a sucker for this sort of sacred extremism (Penn is particularly awesome on this aspect in Presto!). But I also like the idea of eating better and more consciously.

I don't know where any of this leads or ends but I do know that when two folks in my universe coordinate on something, it's usually worth listening to. I think these guys are on to something, albeit from very different POVS. And that being at the RNC in Cleveland is definitely not good for anybody's health (and then there's the DNC next week…).

Here's the trailer for At The Fork: