Paul Ryan, Mitch McConnell and Kevin McCarthy line up to defend the man who campaigned against the mess they helped create 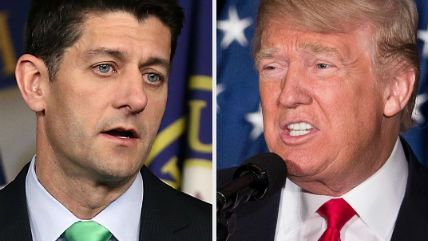 "2016," House Speaker* Majority Leader Paul Ryan (R-Wisc.) and Republican National Convention Chair said tonight, "is the year America moves on." While the Hamlet-like #MaybeTrumper was referring specifically to the Obama/Clinton era, he may have been offering an unwitting epitaph to the haggard, unlovely remains of the Republican Party.

The less-messy Night Two of the RNC, officially branded with coercive label "Make America Work Again," was many things—an infotainment/testimonial marathon, Donald Trump, Jr.'s political coming-out party, and a bully pulpit for Hollywood subsidies. But above all it was the probably inevitable rapprochement between the irresistible force of Trump and the immovable object of the Washington GOP establishment that he spent the last year railing against.

So reluctant endorser Ryan—who as recently as last month was accusing Trump of making "the textbook definition of a racist comment"—smiled and put a happy face on the vast differences in policy and comportment between his fellow presentable reformocons and the barking, anti-trade huckster who has improbably taken over the Grand Old Party.

"Democracy is a series of choices," Ryan explained to us, as if we were seven years old. "We Republicans have made our choice. Have we had our arguments this year? Sure, we have. You know what I call those? Signs of life, signs of a party that's not just going through the motions, not just mouthing new words for the same old stuff."

Coming as it did just 10 or so weeks from Trump threatening to freeze Ryan out of the convention, and from Trump surrogate Sarah Palin warning that Ryan's "political career is over but for a miracle because he has so disrespected the will of the people," Tuesday night's performance gave off more than a little whiff of a hostage video, complete with some blinking out code to the cameras. "In America," Ryan said in a passage ostensibly aimed at the failure of President Barack Obama, but subtweeted in the general direction of Trump, "aren't we all supposed to see beyond class or ethnicity or all those other lines drawn to set us apart and lock us in groups?"

Senate Majority Leader Mitch McConnell (R-Ky.), who has largely handled his evident distaste for the GOP presidential nominee by trying hard not to talk about him, also wobbled onto Trump's stage Tuesday, mostly to serve as an attack dog against Hillary Clinton. "Fortunately, there's a clear choice before us, and it's not Hillary," McConnell said. That was about the extent of his enthusiasm for his party's nominee.

And yet it was McConnell and Ryan and House Majority Leader Kevin McCarthy (R-Calif.) all making their public peace offerings to Trump, the man who spent the previous 12 months channeling and giving voice to the frustrations that conservatives have with the performance by their own elected leaders. And the nose-holding act works both ways—the Capitol Hill Republicans kept their ample Trump-criticism on mute, while Trump during his "pivot" to the general election is no longer focusing as much on the corrupt Washington elite.

But in volunteering to re-shape their own political souls according to the whims of a candidate they don't like, the GOP establishmentarians showed very little understanding of their own tangible contributions to the frustrations that made Trump possible in the first place. McConnell, for instance, gushed onstage about 2014's "freshmen class of rock-star Republicans to the Senate," as if the newly unified GOP-led Congress has been worth a good goddamn these last 18 months.

It hasn't. Here's how one of the most reliably limited-government conservatives on Capitol Hill, Rep. Thomas Massie (R-Ky.), assessed the relationship between Congress and disgruntled voters to me in January:

I think it's like Charlie Brown and Lucy. The voting population is so tired of…trying to kick the football, and it gets pulled away from them at the last second. And they have sent some people here to Congress who said all the right things, they ran as Tea Party candidates, then they got up here and they voted for the omnibus bill, or voting for Speaker Boehner on their first day after pledging they wouldn't vote for him. And so what they're looking for is somebody's that's not going to be controlled when they get here.

You know, I'm not voting for Donald Trump—I'm supporting Rand Paul—but I understand the frustration that leads people to support him. I understand it, and Congress is fueling it.

And here's how the leading libertarian figure in the House of Representatives, Rep. Justin Amash (R-Mich.), put it to me, also from January:

Their hope is that people will for some reason elect more Republicans. […]

But if your idea is simply to wait for the White House and the supermajority in the Senate, good luck. You're likely never to get everything you want.

Presented with a majority in both houses of Congress, the national Republican Party—led by Paul Ryan and Mitch McConnell—promptly waved away the debt ceiling and swore off messy budgetary brinksmanship, leading to (surprise!) a recent $162 billion increase in the annual budget deficit, at a time when the national debt is both unprecedented and unprecedentedly absent from major-party political discourse.

McConnell presented a tantalizing vision of conservative breakthrough if only we could get that last piece elected. Ryan clung to the quaint fiction that "It still comes down to a contest of ideas, which is really good news, ladies and gentlemen, because when it's about ideas that advantage goes to us," despite all readily available evidence to the contrary.

Trump knew these people were compromised when he ran against them, relentlessly, in the primaries. Now that he's forced them to eat a moose-turd pie on national television, a darker possibility begins to suggest itself: They know he's compromised, too. The two camps don't respect each other, don't like each other, and yet they need each other, because they've got no other options. It's not exactly an attractive proposition. Donald Trump may have branding aspiration to Make America Work Again, but he's still got a long way to go even to make the Republican Party semi-functional, let alone believable, in 2016.