Inspiring New Trump Slogan: 'We Have a Man Who Wants to Lead Us'

GOP convention speakers scramble for reasons to elect their nominee. 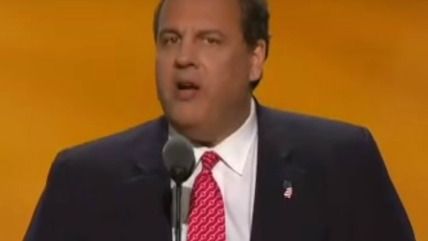 Last night's speeches at the Republican National Convention featured a striking lack of enthusiasm for the party's presidential nominee. The closest thing to ringing praise came from New Jersey Gov. Chris Christie, a former rival for the nomination who not long ago was slamming Donald Trump as a patently unserious candidate prone to "ridiculous" positions because he had "no experience" and no idea what he was talking about. In a convention speech that was mostly an indictment of Hillary Clinton, Christie implausibly described Trump as "a caring, genuine, and decent person."

Former Attorney General Michael Mukasey—who in January warned that "a Donald Trump presidency would imperil our national security" because of the blowhard billionaire's disregard for the law and his failure to present "a reality-based strategic vision," as opposed to "tantrums and homicidal fantasies"—had the decency to refrain from mentioning the candidate at all in a speech devoted to the dishonesty and lawlessness demonstrated by Clinton's email scandal. House Majority Leader Kevin McCarthy (R-Calif.) mentioned Trump just once, claiming that "together, we in Congress [and] Donald Trump…can build a better America."

It was almost physically painful to watch House Speaker Paul Ryan (R-Wis.) grasp for a reason to elect Trump. He tried out a couple of metaphors:

Here we are, at a time when men and women in both parties so clearly, so undeniably, want a big change in direction for America—a clean break from a failed system. And what does the Democratic Party establishment offer? What is their idea of a clean break? They are offering you a third Obama term, brought to you by another Clinton. And you're supposed to be excited about that.

But if Americans are passengers on a runway and Donald Trump is their pilot, they still have no idea where he intends to take them, and one can imagine destinations worse than returning to the gate. Likewise, if the "real person" who is supposed to help you with a billing question or offer technical support turns out to be an obnoxious huckster with a long history of making promises he can't keep, maybe you'd prefer to wait on hold, listening to a piece of Vivaldi's Four Seasons play over and over again.

Senate Majority Leader Mitch McConnell (R-Ky.) had a similar problem in presenting Trump, a shameless prevaricator who has taken every position on nearly every issue, as an alternative to Clinton, a candidate whose lies and flipflops make her unfit for the presidency. "Hillary has changed her positions so many times, it's impossible to tell where the conviction ends and the ambition begins," McConnell said. "Not since Baghdad Bob has there been a public figure with such a tortured relationship with the truth. Fortunately, there's a clear choice before us, and it's not Hillary." To his credit, McConnell never actually said it was Trump.

Despite the desultory treatment Trump received from his quarter-hearted supporters, it is possible to construct some fresh alternatives to "Make America Great Again" from the material in these speeches:

We Republicans have made our choice. (Ryan)

Only with Donald Trump and Mike Pence do we have a chance at a better way. (Ryan)

Let's elect a president and a vice president who believe America is exceptional. (McConnell)

We have an alternative. (Christie)

We have a man who wants to lead us. (Christie)

We have a man who is unafraid. (Christie)

We need a leader who shapes the future. (McCarthy)

Other suggestions are welcome.